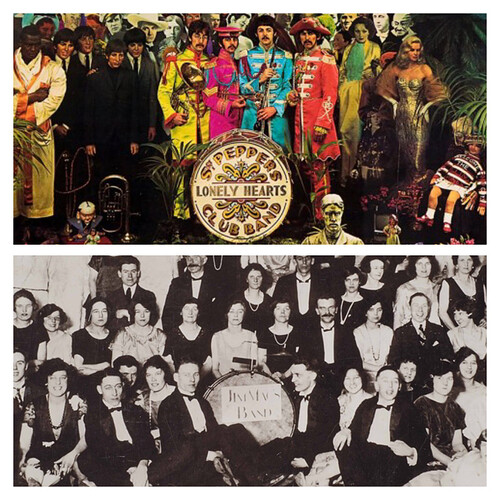 image840×840 269 KB
Paul McCartney’s dad’s group ‘Jim Mac’s Band’. According to singer, songwriter and actress Kate Robbins (Paul McCartney’s first cousin once removed) this photo is owned in most of the McCartney households. It’s not difficult to spot the similarity to the Sgt Pepper cover. Jim McCartney is on the front row, third from the right. ( Thanks to Kate Robbins)

Being a bit of a Beatles obsessive, I’m excited about the 50th anniversary rerelease of Sgt Pepper. The legendary album cover is regularly popping up on my news feeds and I became curious as to the origins of the photos used to create the iconic sleeve.

The collage was designed by Peter Blake and his wife Jann Haworth, and the cut-outs were assembled in Michael Cooper’s London photographic studio. Michael and his team toiled hard to construct the ‘cast of extras’, using a mix of photos sourced from the BBC Hulton Picture Library, images from private collections, waxworks and personal artifacts, including a gnome owned by Ringo Starr.

My first search was for Olympic swimmer and Tarzan actor Johnny Weissmuller (the picture behind Ringo and Paul). When I eventually located the source image, with the unexpected chimp and horn, it was so bizarre and out of context it piqued my interest…