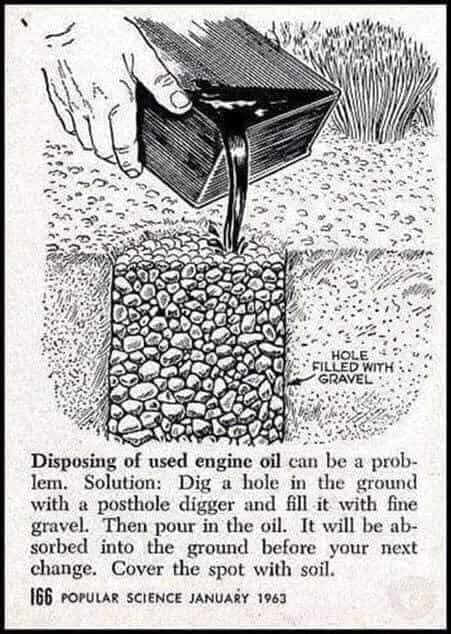 If you guys knew how much petroleum has been dumped, leaked and sprayed into the ground it would floor you. The really old guy who ran my license course said they’d pump out 275 gallon fuel oil tanks into the woods out back before replacing them… but you can’t do that now. Still groundwater is tested and it’s the additives that pose a problem.

I had a great-great aunt, my grandfather’s aunt, that had nerve issues in her face. They treated her by injecting creosote into her tissue and bones… she died of brain cancer.

We didn’t always know what we do now, and though I agree with 99% of regulations there are a few that are beyond my reasoning For instance, a town on Cape Cod, Orleans, is mandating the replacement of all single-walled oil tanks regardless of age or condition… so even those brand new… that’s a bit much, but on tanks 20+ years I am all for double-walled installation… but (and here’s where politicians miss the mark)… if you install them in a place they can get water on them, the water is denser than oil and will crush the inner vinyl tank causing it to spew out of the top (figured this out the hard way… as a tech, not the installer. Two years in, call was clean up an over-fill. Did it and was reprimanded and sent back two days later because it was a mess. Second time there took the time to look around and saw it was under a kitchen sink from all the plumbing. Called the customer and asked if they had lost heat during the winter… they had and the water from a burst pipe had flooded the air space in the tank, and because water is more dense was pushing the oil out of the inner chamber. I used a vacuum pump to suck out the water and never heard back).