Polar bear population discovered that can survive without sea ice

The group has adapted to hunting without sea ice, which suggests some members of the species might survive as the Arctic heats up. 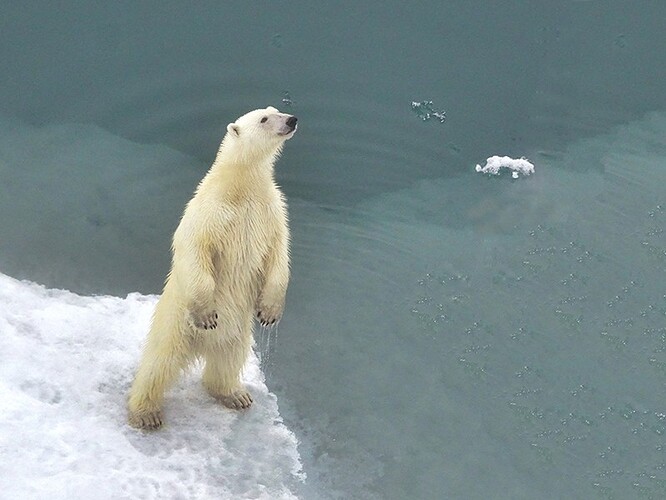 A young adult polar bear standing on his hind legs on ice looking into the distance in East Greenland.800×600 77.2 KB

Polar bears typically use sea ice to hunt, but a newly identified group has found another strategy.Credit: Patricia Hamilton/Getty

An isolated population of polar bears has been discovered in southeast Greenland1, which is free of sea ice for most of the year. Polar bears (Ursus maritimus) typically need sea ice to survive, so the discovery is raising hopes that some members of the species might survive the loss of ice caused by climate change.

Researchers identified the genetically distinct sub-population living in the fjords of southeast Greenland, which is surrounded by mountains and an ice sheet to the west, and ocean to the east. Because this region is so far south, sea-ice coverage lasts for only around 100 days each year.

Polar bears need access to Arctic sea ice to hunt for seals. So, with sea ice in the region diminishing because of global heating, the animals are expected to near extinction by the end of this century.

But the isolated sub-population has found a way to hunt without sea ice. The group, consisting of 27 adult females, has adapted to hunting on the ice that has calved off glaciers — called glacial mélange. The research team used genetic analysis to learn that this population has been isolated from other polar bear populations along Greenland’s east coast for at least 200 years.

Tracking data from tagged bears confirm that they don’t move far. For instance, when members of the group ventured out of the fjords, the ice platforms on which they sat sometimes got caught in the rapid current that travels down the east coast of Greenland. Whenever this happened, “they would get trapped in that current ripping down the coast and they would actually jump off”, swim ashore and walk back home, says lead author Kristin Laidre, an animal ecologist at the University of Washington in Seattle.

The existence of this small population in conditions of low sea-ice cover suggests there is a chance the species can survive, even as sea ice retreats farther north each year. “This small, genetically distinct group of bears could shed light on how polar bears as a species might persist in an ice-free Arctic,” Laidre says.