The global internet is in the midst of a giant innovation leap that will take almost a decade to fully implement, shifting from Web 2.0 (mobile computing, the app economy, and cloud storage) to Web 3.0 (a fully decentralized online ecosystem that includes the potential for a metaverse, an immersive world that acts in parallel to the physical world).

A transformation of the internet will allow for virtual worlds where people can socialize, work, and play. The metaverse is 24/7, exists in real-time, and users have individual autonomy. They experience the metaverse through virtual reality goggles, such as Meta’s (formerly known as Facebook) Oculus Quest 2, which enable users to be fully immersed in a 360-degree virtual world.

Goldman Sachs equity strategist Eric Sheridan said, “We are still 20 years into web 2.0 and expect the timing of web 3.0 will be similar, if not longer.” Sheridan believes the metaverse will present a total addressable market of about $2.6 trillion (most bearish case) to $12.5 trillion (most bullish case) within the next 10-15 years.

With that in mind, there’s no question that the metaverse will be part of our daily lives in the years ahead, and as with any new wave of computing and or technology, there’s always a dark side to the story that corporate media fails to inform the public. It only took our Jan. 23 technology note titled “Dark Side Of Metaverse Exposed: Why Your Kids Need To Stay Away From VRChat” to jump-start an awareness campaign about instances of virtual child abuse, harassment, racism, and pornography on the popular VRChat service. Now new safety protocols are being introduced to prevent predators from running amok in the metaverse.

Following our lead, and weeks later, NYPost published a story of a woman who was digitally “groped” in VR platform Horizon Worlds, created by Meta.

"Harassment in the metaverses is a serious issue that the industry needs to come together on to put in place the correct security controls and safety measures," 43yo Nina Jane Patel told NYPost while referring to her Medium post from Dec. 21. “This is/will continue to be problematic for both men and women (adults) as our world fast moves from the 2D internet as we know it — into the 3D internet space (The Metaverse).”

Readers may recall that we cited The Dark Maze, a metaverse developer and person who has spent thousands of hours in the virtual world, warned VRChat is dangerous for children.

The Dark Maze pointed to countless instances of virtual child abuse, harassment, racism, and pornography on VRChat. They said there are instances of child exploitation and sexualization, warning VRChat is "not a place for children."

Rounding back to NYPost’s story on the dark side of the metaverse, Patel said, “the more damaging lens, of course, will be on our children who will start to use the Metaverse(s) more and moreover the coming years.”

And maybe that’s why regulators in Russia just issued a warning about the metaverse, saying it could enable illegal activity. The Scientific-Technical Center of Roskomnadzor, the federal agency responsible for monitoring social media platforms, released a report days ago that said:

“The transformation of perception on account of being located in the metaverse will have a meaningful cultural effect on society and will change social behavior, including reducing the importance of moral and ethical norms due to the use of a virtual avatar.” They warn that this could particularly affect children, "the most vulnerable group in the new metaverse.

We’re starting to see a trend that the metaverse isn’t a safe space for children. As The Dark Maze documented last month, they captured a video of what appears to be an underaged girl in a 12yo’s body strip dancing for a 40yo Japanese man. They called the act “disgusting.”

The Dark Maze said, “ZeroHedge was the first major news publication to document the story of a VR Developer and content creator’s experience in the metaverse and tell the story of its dark side.” They said mainstream media has been silent on the “horrible accounts of child grooming in the metaverse and VRChat, perhaps because their corporate sponsors are plowing billions of dollars into metaverse investments.” They had an issue with the NYPost’s article because "the problem in the metaverse is not a 43-year-old soccer mom getting ‘virtually gang raped’ but rather kids being groomed in a pedophile free for all."

It just so happens after we exposed the dark side of the metaverse; Oculus released a statement on Friday indicating the addition of a “personal boundary” (think of a personal bubble) that will protect users from being virtually assaulted by others.

“Personal Boundary will begin rolling out today everywhere inside of Horizon Worlds and Horizon Venues, and will by default make it feel like there is an almost 4-foot distance between your avatar and others. Over time, we’ll continue to make improvements as we learn how this affects people’s experiences.” 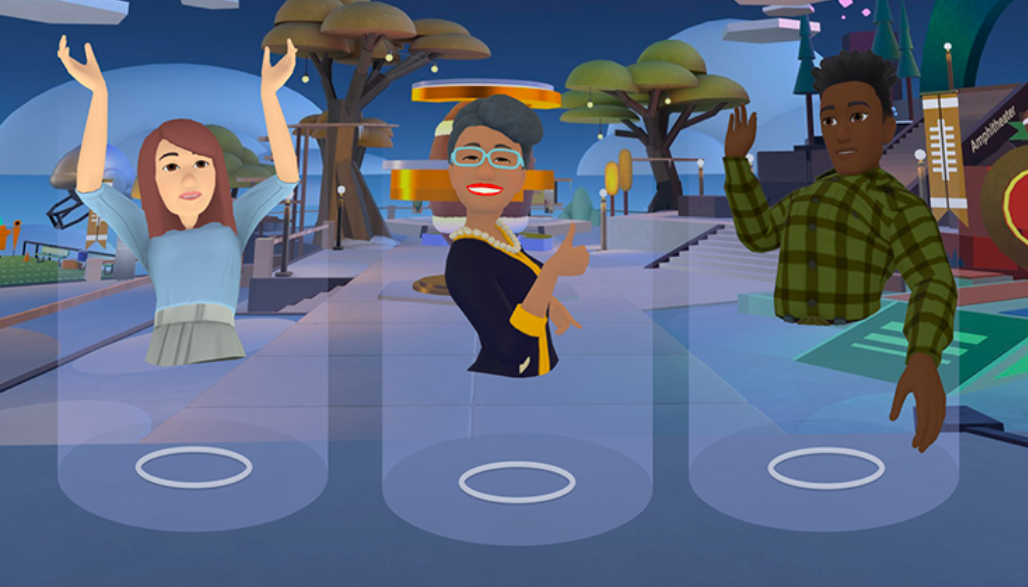 “A Personal Boundary prevents anyone from invading your avatar’s personal space. If someone tries to enter your Personal Boundary, the system will halt their forward movement as they reach the boundary. You won’t feel it—there is no haptic feedback. This builds upon our existing hand harassment measures that were already in place, where an avatar’s hands would disappear if they encroached upon someone’s personal space,” Oculus said.

The Dark Maze questions: “Why didn’t Oculus enforce these boundaries from the beginning?”

Meanwhile, not everyone is hopeful about Meta’s future in the metaverse. Tech founder Phil Libin told Bussiness Insider he’s been critical of the metaverse’s hype. Last month, in a podcast, he said the promotion around the metaverse is comparable to propaganda from the communists as he received as a child living in the former Soviet Union.

He said Meta’s vision of the metaverse is an “interconnected 3D world that we experience for many hours a day, both for fun and for work primarily through VR” – “that package of things is godawful.”

“It’s an old idea,” Libin said. “It’s uncreative, it’s been tried many, many times over the past four decades, and it’s never worked.”

“This week I was saying we are in a global meta-crisis…and then Facebook change its name to “Meta” – replete with a new logo that looks like a PlayStation controller, a sleep mask, or a bad sports bra. (Someone was paid a lot of money, or ‘IOU Chicken’, to mis-draw an infinity loop.) The aim is now “the metaverse,” where promo material shows we can play poker with robot avatars in simulated zero gravity. Welcome to the second coming of Second Life, which we used for a few weeks in the early 2000s until collectively realising how pointless it was to wander around virtual landscapes of boring people pretending to blue-haired Elf ninja warriors? Perhaps fusing it with social media (cough, don’t mention that function) makes it more appealing? For people unsatisfied by pre-existing ‘I am a cat!’ chat features, perhaps; and maybe my future client presentations will be in zero-g with robot avatars? If so, I bagsy Eeyore as my avatar. However, are ageing Facebook users really going to wear VR goggles? How will they fit over their bifocals? And for the younger crowd, there seems stiff competition from LARPing offline.”

The good news from our prior report is that Oculus is finally addressing the cesspool of predators preying on kids and adults by enforcing new safety protocols. Still, the metaverse is in a primitive form, and a lot needs to be figured out to make it a safe space.

"The problem in the metaverse is not a 43-year-old soccer mom getting 'virtually gang raped' but rather kids being groomed in a pedophile free for all."

So a bubble eh? I play MMORPGS… that can be abused far more than ‘groping’ people will ever cause.