In 2012, while studying for her MA Fine Art degree at the University of Hertfordshire in the U.K., Regina Valkenborgh lined a beer can with photographic paper and built her own pinhole camera. Valkenborgh placed the can on a telescope at the university’s Bayfordbury Observatory and eventually forgot to retrieve the can, accidentally creating perhaps the longest exposure image ever taken.

At the time, Valkenborgh, who is now a photography technician at Barnet and Southgate College, wanted to try her hand at capturing images without the aid of modern photographic equipment and technology.

The beer can/pinhole camera, was found this past September by the Observatory’s Principal Technical officer, David Campbell. By the time the forgotten can had been found and removed, the University of Hertfordshire reports that Valkenborgh’s camera captured the sun rising and setting for 2,953 days, a period of eight years and one month. 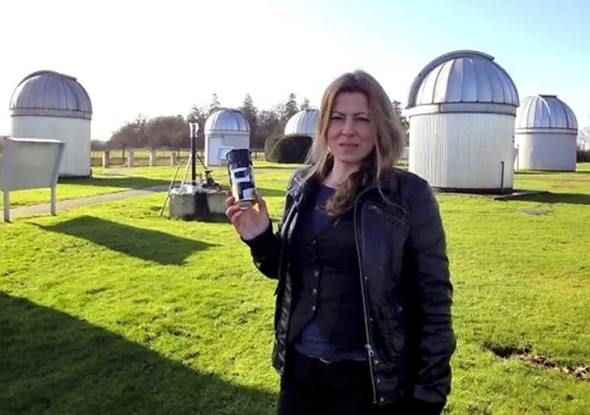 Regina Valkenborgh holding her beer can pinhole camera in 2020. Photograph by the University of Hertfordshire.

Of her camera and its discovery, Regina Valkenborgh said, ‘It was a stroke of luck that the picture was left untouched, to be saved by David [Campbell] after all these years. I had tried this technique a couple of times at the Observatory before, but the photographs were often ruined by moisture and the photographic paper curled up. I hadn’t intended to capture an exposure for this length of time and to my surprise, it had survived. It could be one, if not the, longest exposures in existence.’

Valkenborgh spoke further with National Geographic UK and wrote, ‘My reason for using pinhole photography was because of its experimental nature. Long exposures show the sun’s trails in the sky as the earth orbits the sun. The axial tilt of the Earth becomes clearly visible on the pinhole image with the summer solstice being shown as the higher arches at the top of the image, and the winter solstice as the lower arches just above the horizon.’

Valkenborgh’s image exposed upwards of 2,953 consecutive days. There’s evidence that the paper was exposing light until at least 2018, although it’s possible it wasn’t recording new detail up until its discovery this September.

In addition to capturing the sun’s path through the sky, Valkenborgh’s image shows the dome of Bayfordbury’s oldest telescope in the bottom left corner of the image. Further, an atmospheric gantry was constructed partway through the exposure, which can be seen along the bottom right area of the photograph.

Valkenborgh points out, ‘However, what’s more unique about this is that although the invisible has been captured, it has also erased the visible. Over the years, you’re able to see the sun trails, however you’re unable to see the thousands of people who would have visited or worked at the observatory.’

Although the resulting image is certainly unique, the components needed to make it are all ordinary. Regina used duct tape, a 500ml Kopparberg cider can and Ilford Multigrade photographic paper. She had used a similar construction during her previous two attempts at the Observatory. 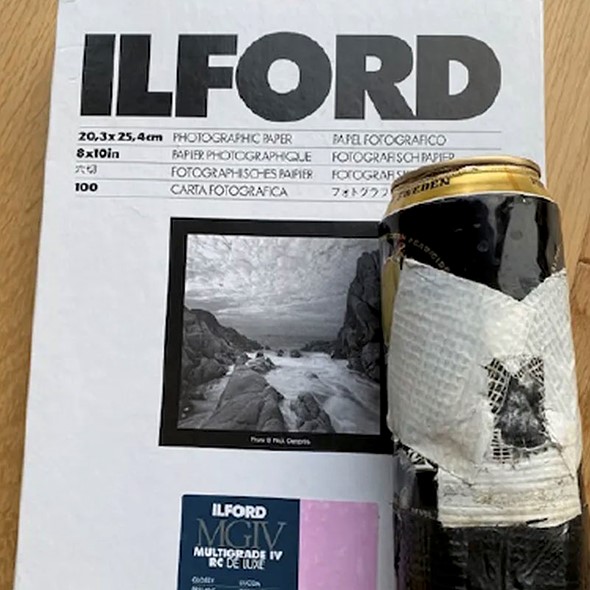 The beer can pinhole camera and a package of similar Ilford paper as was originally used. Photo by Regina Valkenborgh.

National Geographic UK also spoke with Dr. Michael Pritchard, Director of Education and Public Affairs at the Royal Photographic Society. Dr. Pritchard said, ‘This is a stunning – and extreme – example of its type. Regina has been fortunate that no-one disturbed her camera for so long, and she produced a wonderful recording of the way the sun moves with the seasons over time.’

The pinhole camera was certainly on its perch at the Observatory for eight years, although it’s not clear precisely how long the Ilford paper remained sensitive to light and the image was changing. Valkenborgh knows it’s possible that the paper stopped recording additional detail at some time before Campbell found the camera. Campbell himself thinks that much of the eight-year period was exposed, however, as the image shows evidence of change until at least 2018. 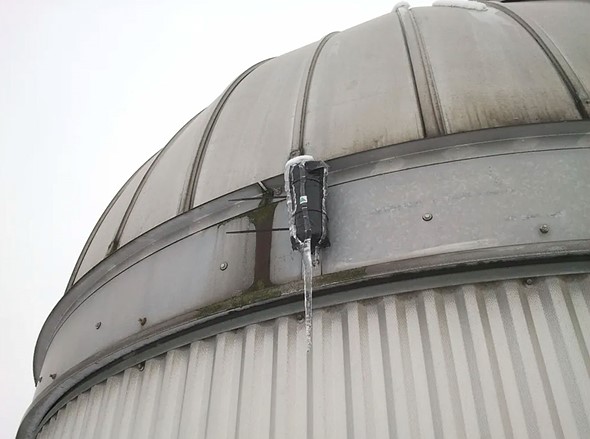 This photo from January 2013 shows the camera attached to the dome at the Bayfordbury Observatory. Image credit: University of Hertfordshire.

If you’d like to try your own hand at extreme exposure photography, Dr. Pritchard says that ‘If you’re making the camera from scratch with an old can then ensuring the pinhole is small enough, and making the camera weatherproof are the two main factors to ensure success. The chemistry for developing the photographic paper is straightforward to use.’

While a student at the University of Hertfordshire in 2012, Regina Valkenborgh constructed a pinhole camera using duct tape and a beer can. She set the camera up and forgot about it. It was finally discovered this year, after exposing upwards of...