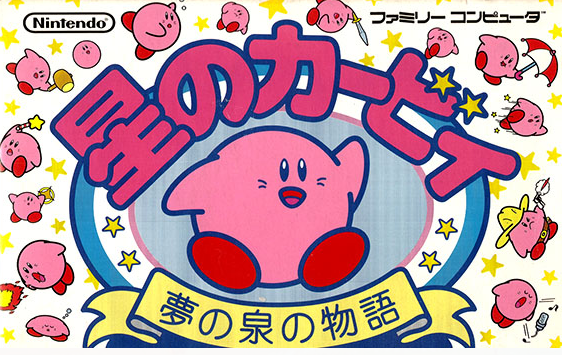 —How did you come up with the idea for the adorable character of Kirby?

Sakurai: Just after I joined Nintendo, they were accepting game design plans for “a game that anyone could enjoy.” That got me thinking, “I want to make a cute main character who everyone will love!” The game I ended up making then was the Kirby’s Dream Land for the Game Boy.

Iwata: When someone really loves a character, they like to sketch them in their notebooks, right? That’s why we gave Kirby a simple circular design, so anyone could draw him. 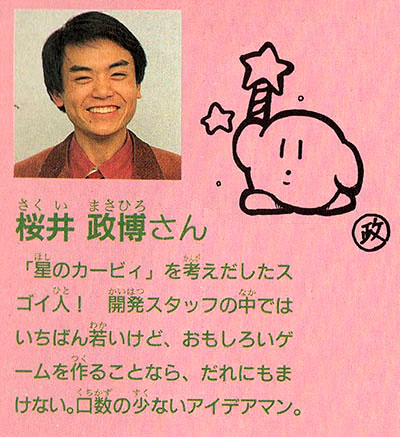 Masahiro Sakurai. “The amazing creator of Kirby! He’s the youngest of the staff, but when it comes to making fun games, he’s second to none. An ideaman of few words.”

Sakurai: I had been thinking he would be pink since we made Kirby’s Dream Land, yes. Of course the Game Boy visuals had to be monochrome.

Shimizu: But Sakurai, you were the only one who thought Kirby was pink!

Sakurai: Yeah, that’s right! Once it came time to create a full-color promotional illustration for Kirby’s Adventure, the staff were all talking about it: “What! You mean Kirby isn’t white?!” or “I thought he was yellow…” (laughs)

Iwata: Now that you mention it, on the cover for the American release of Kirby’s Dream Land, Kirby was colored white. It had a very mysterious aura!

Miyamoto: I remember the first time I saw the color illustration. “Yeah, pink. That looks good!”, I thought to myself. Normally a character like Kirby would have been yellow. Think Pac Man, or Noobow. (laughs) That’s why when I saw Kirby with a different color, it felt really fresh.

Iwata: Before we settled on the name Kirby, he was originally called Twinkle Popo. After we finished the game, however, we talked with Nintendo and it was decided that we should change the name.

Shimizu: We wanted American kids to enjoy this game too, you see. We asked Nintendo of America for their suggestions. Kirby was one of many that they sent us, and it caught my eye when I first saw it. I remember “Gasper” was another one… there were lots.

Miyamoto: We wanted a name that would sound like an American idol. But “Kirby” was actually the name of an important lawyer at Nintendo of America. (laughs)

—Why did you give Kirby that crazy ability to inhale everything?

Sakurai: I was wondering if I could make a game with simple controls, where you use the enemies to attack. I was thinking of using an enemy the way you’d use a soccer ball: heading the enemy, kicking the enemy… 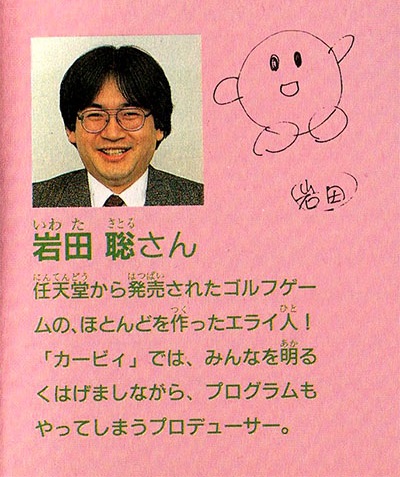 Satoru Iwata. “The genius who created almost all of Nintendo’s Golf game on his own! For Kirby, he worked as both programmer and as a producer cheering the team on.”

Iwata: We came up with a lot of ideas, and the one that stuck was “flying.” How would Kirby fly? By puffing up like a balloon! How would he do that? By inhaling the air. Wouldn’t it be fun then, if he could inhale enemies at the same time? …that was the basic thought process.

—And why did you give Kirby the ability to absorb and copy enemy abilities for this game?

Sakurai: Kirby was originally designed to be a somewhat easy game, something that a young child could enjoy playing. However, after the Game Boy Kirby’s Dream Land was released, there was a lot of feedback from players saying “it was too easy and too short.” For the sequel I was thinking, how can I retain the easy parts, but make it so skilled players could have fun too? That was when the idea of copying enemy abilities came to me.

Suga: For example, even if you could just easily fly your way to the end of the level, by taking the Parasol ability you could enjoy the game in a whole new way. Each different ability would allow the player to approach the level differently. We wanted something players would enjoy experimenting with.

Iwata: Originally we had over 40 enemy abilities. From those we selected the best ones, whittling it down to the final number you see in the game today.

Saitou: What were some of the abilities that didn’t make the cut?

Iwata: There was one called “Animal” too, where you could scratch and bite enemies.

—Kirby sure loves to dance and jump around, doesn’t he? 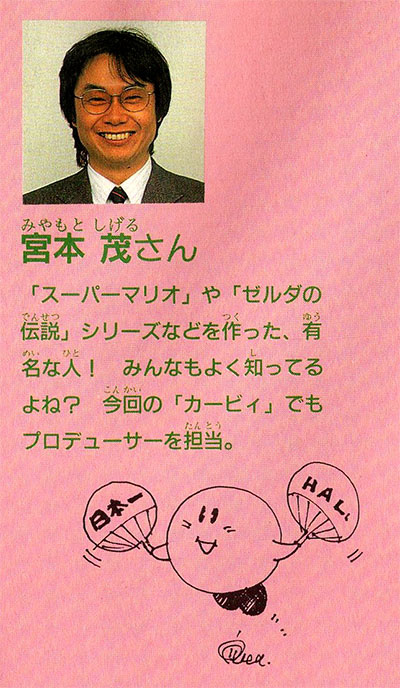 Shigeru Miyamoto. “The famous creator of the Mario and Zelda series! You all know him, right?! He was a Producer for Kirby.”

Iwata: We prepared a huge number of movements and animations for Kirby this game.

Shimizu: Many people had said Kirby was too small last game, so we decidded to make him bigger this time. Since we’d gone to the trouble of doing that, it was like, “He needs more moves now.” (laughs)

Iwata: Someone said, “Wouldn’t it be cool if Kirby planted a flag when he beats the level and comes out of the door!” And before you knew it, I had programmed that in myself. (laughs)

Saitou: That door was originally square, too. But Shimizu came to us and pointed out that, “the problem with this door is that it opens inwards, but Kirby is standing there in front of it, so you can’t tell if it’s open or not.”

Iwata: I remember he had that grin on his face when he said it, too. (laughs)

Shimizu: Yeah, I caught a lot of flak after that. (laughs) “Shimizu! We’re already behind schedule here, stop bringing us these impossible requests!” The only thing that saved me then was frequent hinoki (cypress wood) baths. (laughs)

Saitou: The development center of HAL Laboratories is in the Koufu Basin in Yamanashi prefecture. There was a ryokan inn near our offices with hinoki onsen baths. Towards the end Shimizu was taking a bath there nearly everyday before work. (laughs)

—The mini-games in Kirby’s Adventure are really addicting too.

Sakurai: I thought I’d make a few small, compact games—ones easier and simpler than the main game itself—to include with Kirby. So I tried making 4 different “one button” games. Who could press the button the most times in a short span of time was my first idea. Then I thought up a “who can press the button first” game (Quick Draw), and after that a “should you press it, or not?” (Egg Catcher) and a “button timing” (Crane Fever) game.

Saitou: They all got included as mini-games, except for your first one about repeatedly pressing the button as many times as you could.

Iwata: Quick Draw uses the camera angle from before the game starts. I believe Saitou created that?

Saitou: I was given that task, yes. (laughs) 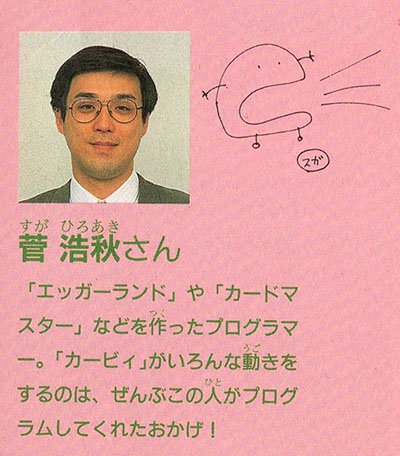 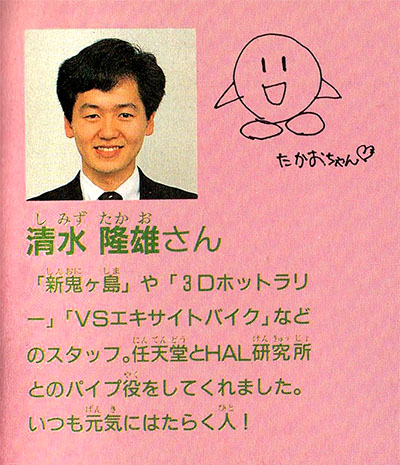 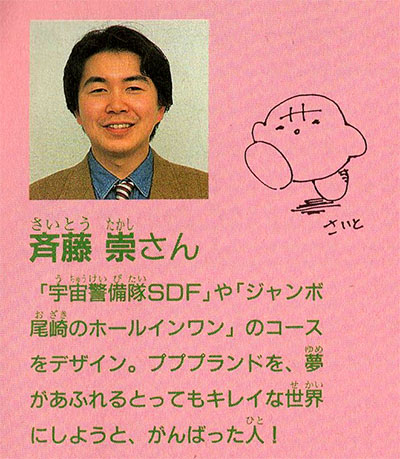 Hiroaki Suga: “The programmer who created Adventures of Lolo, Arcana, and others. All of Kirby’s moves are the work of his programming!”

Takao Shimizu: “Staff on Shin Onigashima, 3D Hot Rally, VS Excitebike. Acts as the pipeline between HAL and Nintendo. A person who always works cheerfully!”

Takashi Saitou: “Designed the stages for Uchuukeibitai SDF and HAL’s Hole in One Golf. He worked hard to make Dream Land a beautiful place filled with dreams.”

—The backgrounds in Dream Land are so pretty, too. How did you accomplish that?

Saitou: Our concept from the beginning was to make stage backgrounds that would be pretty enough just to look at on their own.

Iwata: Normally, that work is done by a person who specializes in making game maps. For Kirby’s Adventure, however, we first had a designer draw pictures of the maps, which we then had the mapper re-work for inclusion in the game.

Miyamoto: Famous locations and sightseeing spots always have mountains, rivers, or something that calls out to your heart—which is why we call those places “beautiful,” right? I think it’s the same way with games. If you just draw any old map for a game, it won’t have any meaning. In the future I really want to see more game maps drawn by people with that artist’s sensibility.

—So, what does the future hold for Kirby?

Sakurai: At this juncture, I’m not thinking about the next Kirby game. I can’t say that Kirby is going to “go gold” like Mario, but I do want him to be a character that is always loved by everyone. After we released Kirby’s Dream Land, I remember occasionally seeing chalk drawings and graffiti people had drawn of Kirby, in parks and open spaces. I hope that happens again with Kirby’s Adventure!

Iwata: Kirby has quite a simple form, but it’s precisely because of that simplicity that he’s so hard to draw right! Everyone here draws him differently.

Saitou: Among our staff, many people still call him Twinkle. So we call the fake Kirby drawings “___ Twinkle”. (laughs)

Iwata: Yeah! The ones I draw we call “Iwata Twinkle.” (laughs) Only Sakurai can draw the real Kirby, and we call him “Sakurai Kirby.”

Shimizu: My hope is that Kirby’s Adventure will be a game with longevity, one you can always enjoy playing. We’ve included a lot of different things for you to play around with, so it will still be fun even after you beat it the first time. 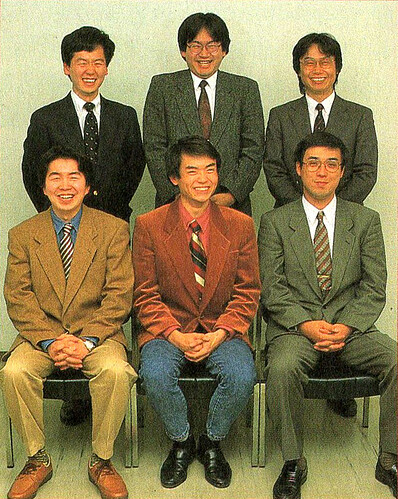 I’ve been watching loads of these lately. It’s well worth seeing the Super Mario DS 4 update of Super Mario 3!

Ah here you go, it was Super Mario Bros Advance 4: