Josh Niland and the new gospel of fish

The Sydney-based chef made waves with his first scale-to-tail credo. Here’s the next testament

August 4, 2021 3:55 pm by Ajesh Patalay
It doesn’t surprise me to learn that Josh Niland’s father, once an accountant, is now a minister. There are aspects of a higher calling to what the Australian chef is doing too. One might even call him a prophet of a radical new gospel of fish. As chef owner of the Sydney restaurant Saint Peter and retail space Fish Butchery (“a gleaming, fish-focused hybrid of an Apple store and a Damien Hirst installation”, according to Melbourne restaurant critic Pat Nourse), Niland has revolutionised the way we think about fish with his scale-to-tail approach to cooking, where almost every part of the fish is used.

His methods are sustainable, maximising the yield of each fish from a standard 40-50 per cent up to 90. And delicious too. Among the most in-demand dishes at Saint Peter are the terrines (made from fish heads) and eye chips (deep-fried fish and squid eyes). Niland also creates mortadella out of milt (testes), skewers of heart, spleen and intercostal meat, and black pudding dark with fish blood. His other innovations include dry-ageing and fish charcuterie. And he isn’t shy about calling out bad practice in the industry, such as the use of water and ice to process and store fish.

Half-split coral trout cocktail with syracuse potatoes
Half-split coral trout cocktail with syracuse potatoes © Rob Palmer/Take One Fish by Josh Niland (Hardie Grant, £26)
This month sees the release of his second book, Take One Fish, which feels like the slightly more accessible New Testament to his Old Testament debut, The Whole Fish Cookbook. That book from 2019, which Jamie Oliver called a “mind-blowing masterpiece”, contained plenty of recipes (including a Satanic-looking turducken of yellowfin tuna inside cod inside trout). But by Niland’s own admission, the recipes were just a “gesture” alongside the heart of that book – its “exhaustive” rundown of his philosophy.

Josh Niland, chef
“I wanted this new book to feel more joyful,” Niland says, “to make it feel a little bit dirty and delicious: burnt edges, crispy things, drips – things that don’t really come to mind when we talk about fish.” The very appealing range of recipes and cooking methods, chosen to complement the flavour and texture of particular species and cuts, includes fish cooked Peking-style, Gai Yang-style, salt-pastry baked, drunken, curried, schnitzeled as well as in a Scotch egg, banh mi sandwich, Merguez sausage, lasagne, kofta and tacos al pastor. “With everything from the smoked snapper quiche to the John Dory tagine, I am trying to take big-ticket items that excite ordinary people and build a fish around it, so it conjures deliciousness,” he says. The John Dory tagine, which I tried, is a triumph: rich, spicy, the perfect vehicle for this deep, savoury fish. I also grilled the heads and collars as per Niland’s instructions. They tasted insanely good.

Niland with a cut of tuna
Niland with a cut of tuna © Rob Palmer
Despite its appeal to the home cook, this book is also squarely aimed at the industry, offering up what Niland calls “provocations” to do better. As fish is porous, packing on ice and spraying with water (either as part of processing or just to make fish look nicer) can lead to waterlogged flesh and soggy skin – and reduces shelf-life and flavour. But dry-handling methods (where the fish doesn’t touch water once out of the sea) would “put a big handbrake on the whole system”, says Niland. Given current practices, what does Niland suggest the average punter do? “Ask your monger to scale and gut the fish, take out any bones you don’t want, but not to wash it. You’ll have sediment, scale and a little bit of blood, but that’s nothing you can’t handle with paper towels.”

Recommended
Café Cecilia: a first taste of Max Rocha’s new canalside canteen
This summer Niland opened his third venue in Sydney called Charcoal Fish, based on the grilled-chicken-shop model. He sees it as the ideal way to showcase the diverse applications of one fish, in this case Murray cod, for the everyman customer. The menu includes whole rotisserie cod with chips, grilled collars with fermented tamarind hot sauce, gravy made from the heads, frames and fins, even caramel ice cream using rendered cod fat.

Having seen a recipe for charcoal-grilled flounder in his book, I ask what the cod version tastes like. “It’s as close to roast pork as you’ll get,” Niland says. “When I run the blade over the fish, you can hear how crisp and crackling it is. We age the fish for six days before putting it on the rotisserie, so as well as the snap and crunch from the skin, you get dripping fat from the flesh, which is more savoury from ageing.” He hopes to export the concept to London, the US, the world. I reckon the world would be fine with that. 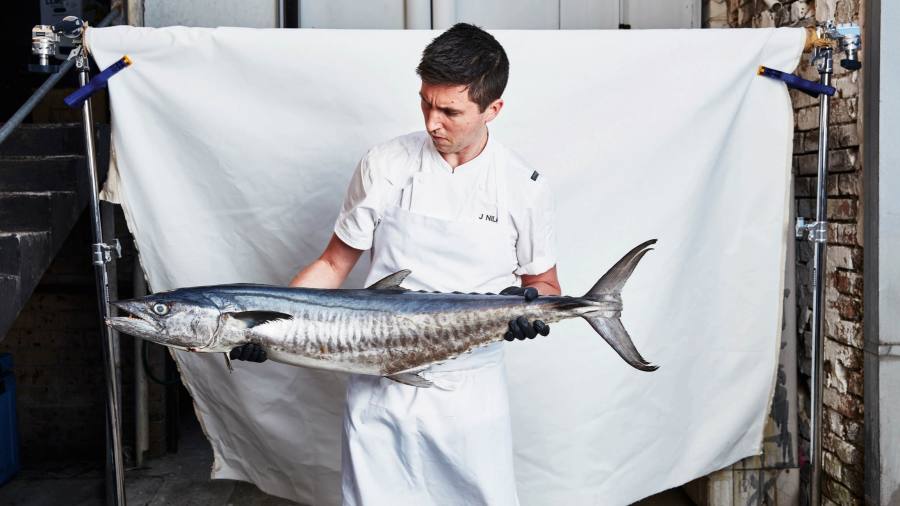 Josh Niland and the new gospel of fish

The Sydney-based chef made waves with his first scale-to-tail credo. Here’s the next testament