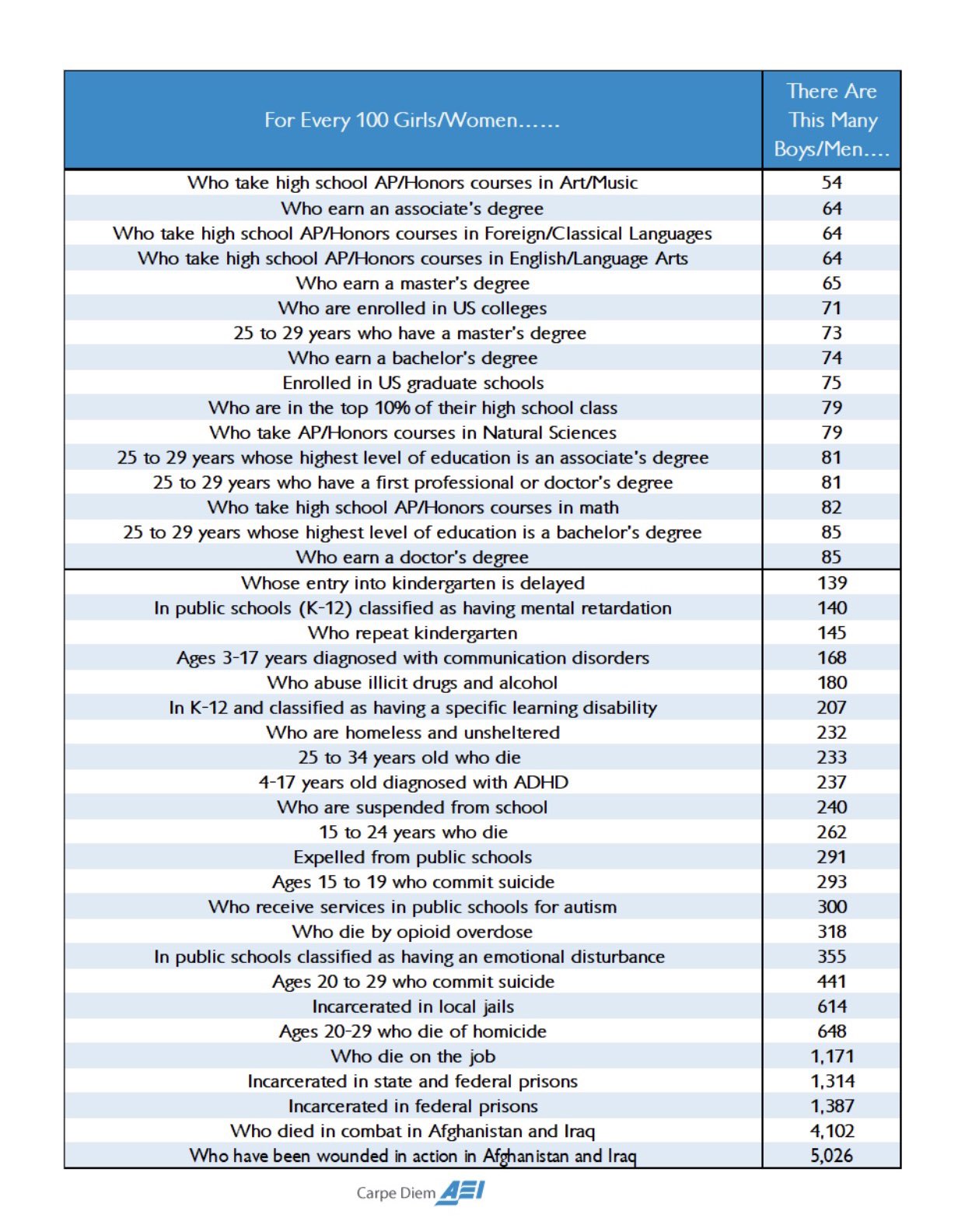 Sobering and staggering. This is sad.

Look at that beautiful list, showing the world how boys are the ones who are oppressed. You know what’s the best thing about it? There’s no data on rape!

You mean the 40 percent or so? That you are purposefully ignoring?

Don’t we all love sequels?

If you include prison rape (and men get put in prison far more than women for the same crimes) men actually get raped more. Further the statistic on ‘forced to penetrate’ is not considered rape, and most of society considers minors groomed to sleep with older women ‘lucky’ not victims.

Plus, was that Epstein who “killed himself” in prison while all the cameras spontaneously had a glitch? Do we want to go through who who made it to the island, starting with the Clintons and moving through many in the financial world?

For every 100 women (girls) that have been or are POTUSA there are more men (boys) than there are elementary particles in the visible universe!

Rape in this case, just like with war in Iraq and Afghanistan, is just a side show. The real question is why is there so much incarcerated population of the USA? And is the war really a necessity?

Well, if it is up to me personally, then yes. I want to get to the bottom of this and find everyone responsible for rapes and bring them to justice. Clintons, Trumps, Weinsteins, Hollywood… everyone.

BTW, how is it possible to penetrate a prison and have Eppstein killed in a swamp that has been drained? And are people (Clintons) who are hell bent on rape and have the power to get in and out of prison faster than in a monopoly board game afraid of it? And why do they need political power when the laws clearly don’t apply to them?

I guess they will just give some women a few billion to get that up to 50%, just sack a few of the men in the list that’ll do it.

For every 100 women (girls) that have been or are POTUSA there are more men (boys) than there are elementary particles in the visible universe!

You are suggesting every woman in America could be president?

I have three daughters and one son, I will not minimize my son to prop up my daughters. I will encourage each to give their all and achieve a 100% of their potential without stepping over others.

The reality is that assault and abuse against women is staggering, but the numbers on men/boys do not lie. We have neglected our boys/men mental well being and in the process of propping up our daughters created a generation of abusive men/boys with a slew of mental health problems. You’d be blind to not recognize the harm we do to our boys. Im not saying we should coddle them, but also not ignore their mental and emotional needs. Tending to basic humanity alleviates a lot of the ills of society. ~ Elsels 2021. Wholly carp, that was a great line!

I’m on revision 2…tbh it made more sense.

Men are notorious gamblers. Men are more likely to swing for a home run. I wonder what gender stats are on people who gambled it all and lost it all. I would hazard a guess that it is mostly men as well.

Really, that forbes statement is akin to “women make 70% that of a man”. It’s inflammatory and does not help anything but furthers ignorance, instead of looking at why.

Sorry about that, I’m at the app and it’s a bit confusing.

Chicks loves dick pics, if they are into the guy or find him hot. It’s all optics. If she is into the guy, then dicks pics rule. If she is not, then he is a creep and how dare he.

All guys accept all tit pics, end of.

Raises hand…I can categorically say, I have never refused a tit pic.