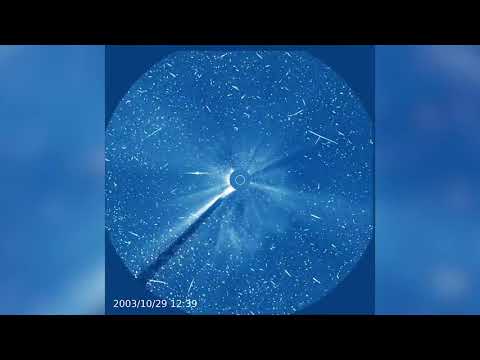 December 2, 2020 marks the 25th anniversary of the Solar and Heliospheric Observatory, or SOHO — a joint mission of the European Space Agency and NASA. Since its launch on that date, the mission has kept watch on the Sun. This view of the Sun has been processed by scientists at the Naval Research Lab in Washington, D.C., which manages SOHO’s LASCO instrument, to merge views from two of LASCO’s coronagraphs: C2, which images closer to the Sun’s surface but has a smaller field of view, and C3, which has a wider field of view. Throughout the video, the Sun releases bursts of material called coronal mass ejections: fast-moving clouds of solar material that can trigger space weather effects on Earth — like auroras, communications problems, and even power outages — and for spacecraft in their path. These storms are more frequent near solar maximum, the period approximately every 11 years when the Sun’s activity is at a high point. The dark area that migrates between the lower left and the upper right of the image is caused by the coronagraph’s occulter arm, which holds the disk to block out the Sun’s face. It appears to change positions periodically as the spacecraft rolls to keep its high-gain antenna, used to transmit data, pointed towards Earth. The occasional blank squares are caused by corrupted data. The bright, horizontally elongated objects that pass through the field of view are planets, which can be so bright that they saturate pixels along the same row. The video begins in 1998 because of a change in the way data was stored after the mission’s first two years. Read more: https://www.nasa.gov/feature/goddard/… Footage courtesy of The U.S. Naval Research Laboratory