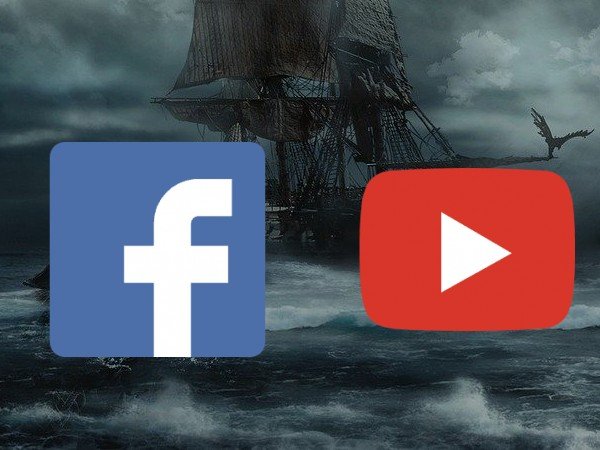 There has been no shortage of anti-piracy initiatives in Denmark in recent years. Shutdowns, raids, arrests, and site-blocking orders have repeatedly made headlines. Against this backdrop, it’s surprising to see that piracy has become more popular, with YouTube and Facebook now the top sources to access content illegally. Meanwhile, password sharing is a growing concern too.

These enforcement actions were combined with various court orders that compel Internet providers to block pirate sites. In theory, these efforts should be the perfect environment for piracy to decrease. On the ground, the opposite is happening.

Danish anti-piracy group Rights Alliance reports that illegal consumption of movie and TV content has reached the highest level in nine years. This number comes from an annual survey among more than a thousand respondents, carried out by Mediavision.

According to the latest data, 13 percent of the Danish population between the ages of 15 and 74 regularly pirate film and TV content. Compared to previous years, people are increasingly downloading and streaming locally produced content.

Nearly half of all Danish pirates (48%) use YouTube to access content illegally with 42% using Facebook. These two “big tech” sites are far more popular than traditional pirate sources such as Popcorn Time and Solarmovie. 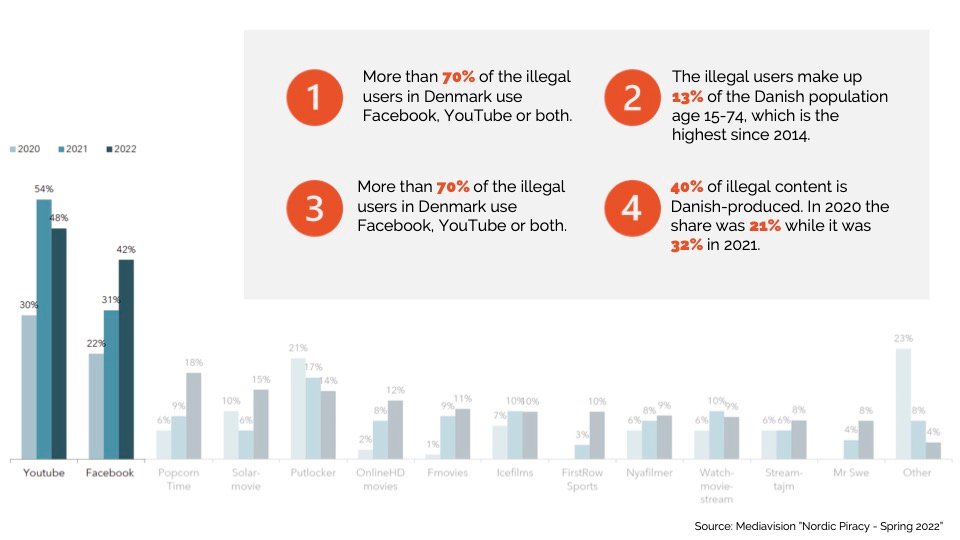 The survey further reveals that almost 30% of pirates use YouTube and Facebook exclusively. The remainder have scattered over more than a dozen alternative pirate sources, of which streaming sites FirstRow Sports and Mr. Swe are growing most rapidly.

“We are seeing an alarming increase in the volume of illegal consumption, which is mainly due to more and more people streaming content illegally via Facebook and YouTube,” Fredenslund says.

“Although these platforms now are required to provide effective tools to ensure that illegal content cannot be uploaded, Mediavision’s investigation shows that we have not yet seen the effect of this.”

Fredenslund hopes that both YouTube and Facebook, partly motivated by new legislation such as the EU Copyright Directive, will do more to prevent copyright-infringing content from appearing on their platforms.

In Denmark, Rights Alliance has been the driving force behind many enforcement actions. The group helped to obtain several site-blocking orders and following negotiations, all major ISPs will adhere to these.

These blockades obviously don’t apply to YouTube and Facebook. And for traditional pirate sites, people can find workarounds.

Mediavision’s survey found that more than a third of all Danish pirates use VPNs (38%) or alternate DNS servers (36%) to get access to blocked sites.

Aside from piracy, rightsholders also face another challenge. The number of people who share passwords to subscription services such as Netflix and Disney+ is growing as well.

Last year, 31% of all Danes shared passwords to streaming services with people outside of their household. In 2022, this percentage has grown to 37%, even though most people know that it’s against streaming platforms’ terms of service.

While password sharing is not counted as piracy, it likely results in a loss in revenue. Nearly half of all respondents indicated that they would sign up for a subscription if sharing was no longer possible.

“Sharing passwords may seem harmless to the individual user, but it is not allowed, and it affects the entire food chain when content is not paid for,” Fredenslund says, calling for more strict enforcement.

All in all these data reveal that unauthorized media consumption is hard to curb. While extra enforcement efforts may help, rightsholders may also want to look into affordable legal options, as opposed to requiring people to take out a handful of subscriptions.