… At The Border As Biden Starts Releasing Illegals Without Court Date

After the Biden administration began blaming the border crisis on former President Trump leaving them with a ‘dismantled’ immigration system, Trump hit back in a Sunday statement claiming that he " proudly handed the Biden Administration the most secure border in history ," adding “All they had to do was keep this smooth-running system on autopilot.” 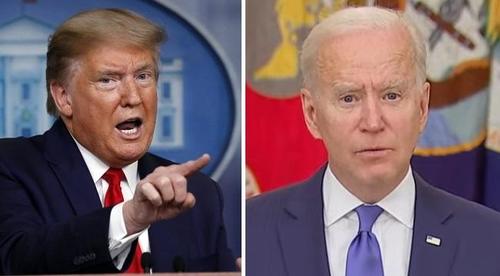 "Instead, in the span of just a few weeks, the Biden Administration has turned a national triumph into a national disaster . They are in way over their heads and taking on water fast. "

Trump then turned his attention to DHS Secretary Alejandro Mayorkas - who went on several news networks Sunday morning claiming that “the border is closed.” Mayorkas’ performance was " pathetic ," " clueless ," and a " national disgrace ."

“His self-satisfied presentation - in the middle of a massive crisis he helped engineer - is yet more proof he is incapable of leading DHS . Even someone of Mayorkas’ limited abilities should understand that if you provide Catch-and-Release to the world’s illegal aliens then the whole world will com.”

Trump then slammed Mayorkas for a “Gag Order on our Nation’s heroic border agents and ICE officers,” which the former president said should be the subject of an immediate congressional investigation.

“But it’s clear they are engaged in a huge cover-up to hide just how bad things truly are,” Trump continued.

Trump then suggested that the Biden administration should “immediately complete the wall, which can be done in a matter of weeks,” adding “they never should have stopped it” and are “causing death and human tragedy .”

Trump’s statement came minutes after Fox News reported that Biden’s border agents in the Texas Rio Grande Valley are releasing illegal migrants into the United States without a court date .

Multiple Border Patrol agents confirmed the new process to Fox News, revealing that they have been directed to use prosecutorial discretion (PD) to forgo the hours-long process of paperwork required to issue an NTA amid the surge of migrants at the border.

Instead, migrants are registered into the system with biometrical data taken and largely released into the public - in one instance - at a bus station in McAllen, TX. The processing is being done mostly at a temporary outdoor processing site. Border Patrol agents emphasized that this does not apply to unaccompanied children. -Fox News

A senior source with Customs and Border Protection told Fox News on Saturday that immigration officials are resorting to this type of catch-and-release because the border crisis “has become so dire that BP [Border Patrol] has no choice but to release people nearly immediately after apprehension because there is no space to hold people even to do necessary NTA paperwork.”

The immediate catch-and-release does not apply to child migrants - 15,500 of which have been sitting in ‘cages’ built by the Obama-Biden administration - many beyond the legally allowed 72-hour limit. Trump Rages Over "Huge Cover-Up" At The Border As Biden Starts Releasing...

"In the span of just a few weeks, the Biden Administration has turned a national triumph into a national disaster."