The truffle industry is a big scam

… Not just truffle oil, everything

You may be familiar with the truffle oil scam, but everything else you think you know about truffles is probably a lie too. 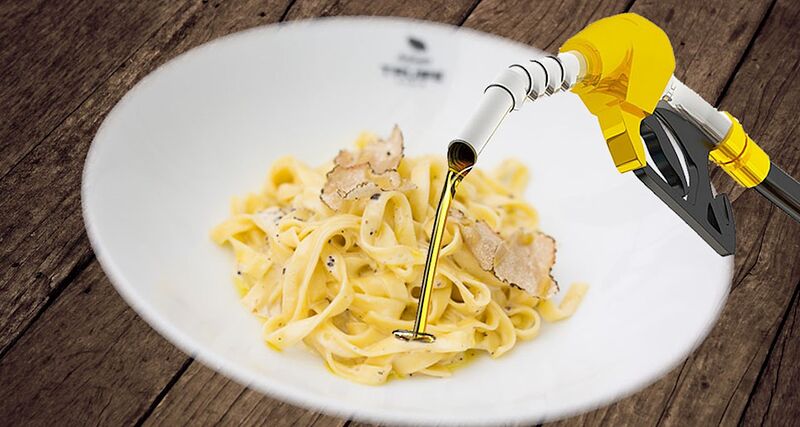 You probably already know that “truffle-flavored oil” is not made from truffles. It is a cheap oil with added synthetic truffle flavor.

There are several reasons why this is terrible. Synthetic garbage sold as a luxury gourmet item gives customers the idea that truffles have an intense gas-like aroma.

It is a scam because it deceives customers; that is, it falsely represents a product that has nothing to do with truffles and puts all restaurateurs who try to work honestly in an unfavorable position: if you don’t flavor truffle dishes with added aromas and flavors that the guests are used to, the naive guests will think you’re being cheap and trying to save on their meal. 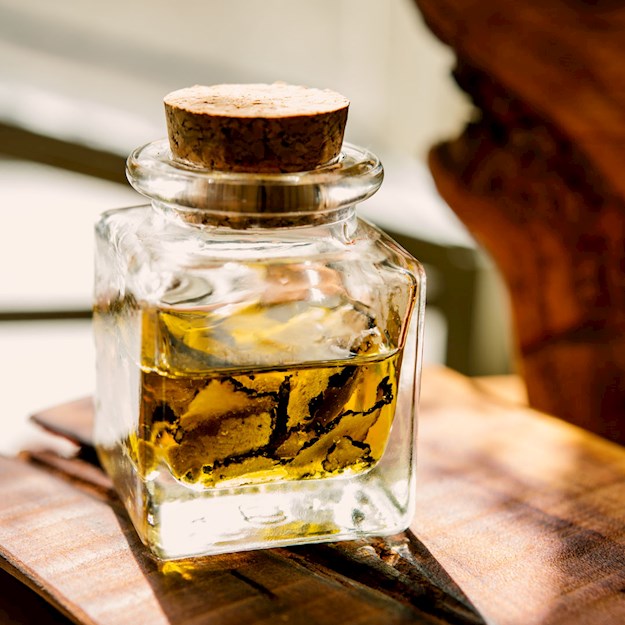 Everything you think you know about truffles is a lie

What you don’t know is that almost everything else named “truffles” is a lie: we don’t just mean truffle-flavored chips, ketchup, or chocolate (you can surely taste the artificial aroma), but also tartufata, jar packaged truffles, cheese, and truffle sausages, as well as the vast majority of pasta and “truffle” frittatas in restaurants.

Quimet & Quimet is one of the tourists’ favorite tapas bars in Barcelona. Their secret? “Truffle” honey on almost everything. Machneyuda is the biggest hit restaurant in Jerusalem. Their secret: truffle oil in polenta. Every metropolis is packed with stalls selling burgers “with truffles.” Many well-respected pizzerias serve pizzas “with truffles.”

Almost all the restaurants in Croatian Istria serve dishes with a fake truffle aroma, though they shave the decorative truffles on top. Even the otherwise fantastic Eataly offers products “with truffles.” But all that flavor doesn’t come from truffles. 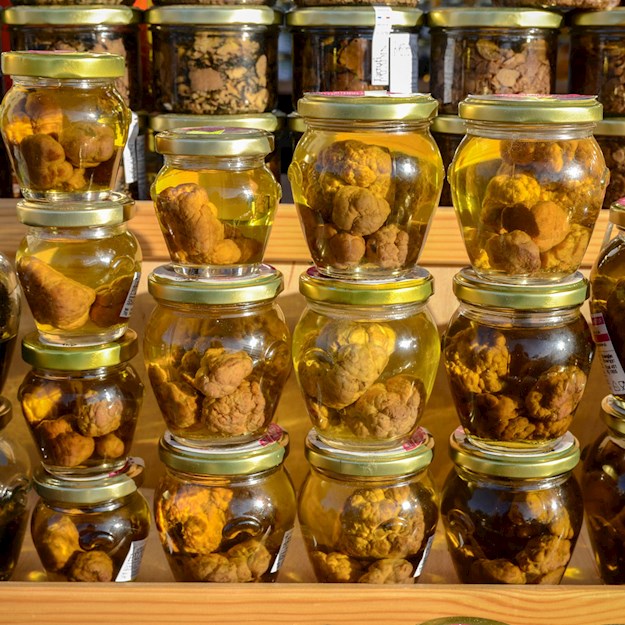 There is no shame in not knowing that. As the best truffles are extremely difficult to find, most chefs and journalists are unaware of this. Even the “experts” hand out awards for this aromatized garbage with only bits of decorative truffles. Almost everything with the truffle label that is available in stores or served in restaurants is a lie and a fraud.

If you think you know what truffles taste like because you had them at restaurants, or you may have prepared something with the products you bought at specialty food stores, you almost certainly still don’t know the authentic truffle flavor. The flavor you are familiar with is the added aroma found in all the products labeled as containing “truffles.”

There is a good joke: because of sanctions against Russia, the price of tartufata will increase. I may not be objective about the quality of the joke, as I invented it, but the fact is: what is sold as truffle flavor is 2,4-dithiapentane, an organosulfur compound that is naturally found in truffles, and though it is practically impossible to extract it from truffles, it can be extracted from oil.

Liters of this petroleum-derived product, the colorless 2,4-dithiapentane liquid, are sourced for a few euros from Italy, Germany, or China, and then they end on your plates and refrigerators, in pasta, tartufata, oils, cheeses, and sausages, but also in expensive delicacies with a prostituted label “truffles.” 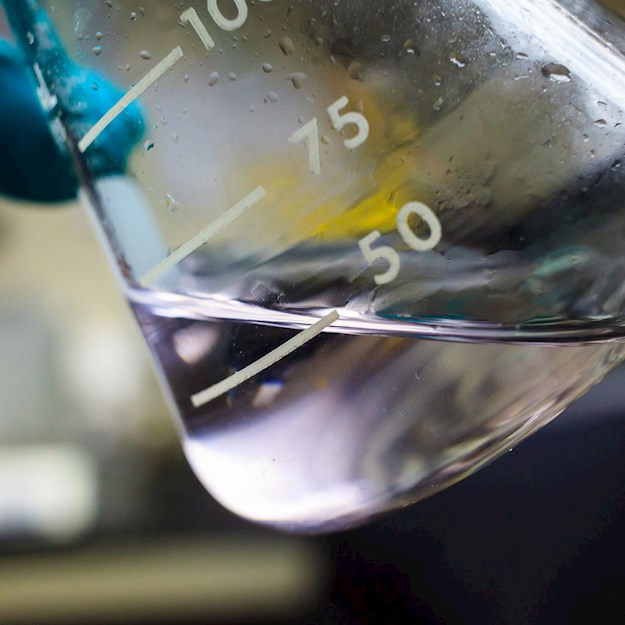 If you find the smell of restaurants’ truffle dishes foul, it does not mean that you do not like truffles; it could indicate that you have good taste and do not like petroleum on your plate. Unlike that intense gas-like smell, the aroma of real truffles is mild and complex.

Some will compare the difference between the natural flavor of truffles and the artificial truffle flavor with the difference between sex and sniffing dirty panties. Martha Stewart says: “Many studies have been done with truffle oil. It is fake, synthetic, and awful. Truffle oil should not be in anyone’s kitchen.” Bourdain was the most direct: “Let’s say this once and for all. Truffle oil is not food at all.”

“But I had real truffles on my plate”

Now you might say: but we had real truffles on the plate! Or, we had real pieces of truffles in the cheese. Yes, that is the worst part of the scam. Decorative truffles are here to make a fool of you. 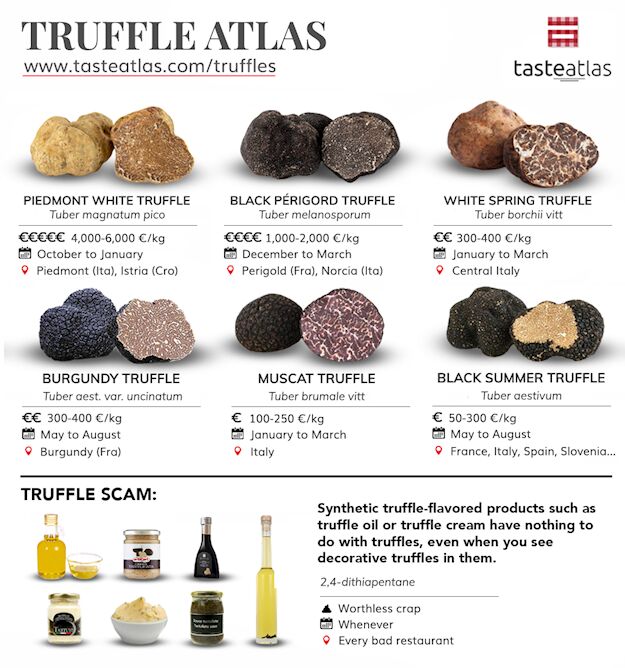 Not all truffles are the same. They are not even similar. While some are sensational, complex, and cost ten thousand euros per kilo, others are merely decorative, tasteless, and worthless tubers.

The problem is that sometimes they serve you the latter but charge as if it is the premium, the first-mentioned truffle. The difference in flavor is then compensated by the artificial petroleum aroma.

There are more than 60 classified truffle species, around 25 species are edible, and four of those are most commonly used.

Winter white truffle, or noble white truffle, is the most expensive and prized truffle. It can be found only in late autumn and winter, no earlier than September 15, no later than the end of January. The world’s most famous winter white truffles are found in Alba, Italy, and Croatian Istria is also known for them.

Depending on how well the season was, this truffle can go for thousands of euros. In the case of large, first-class white truffles, the price per kilo comes close to 10,000 euros. 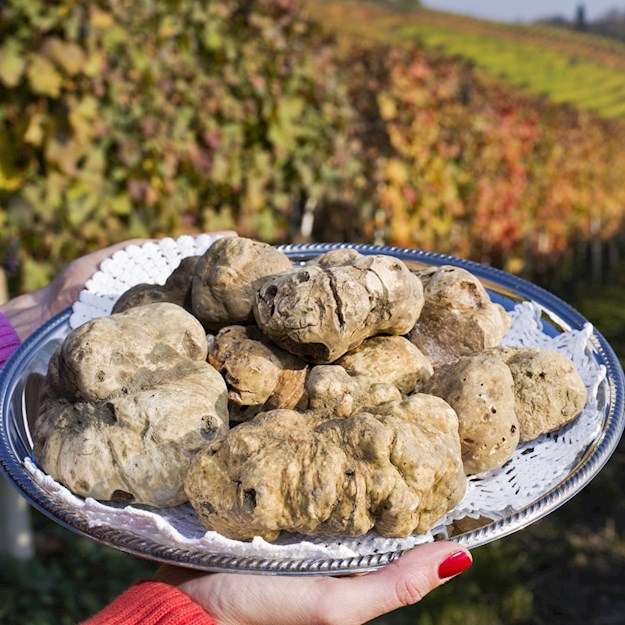 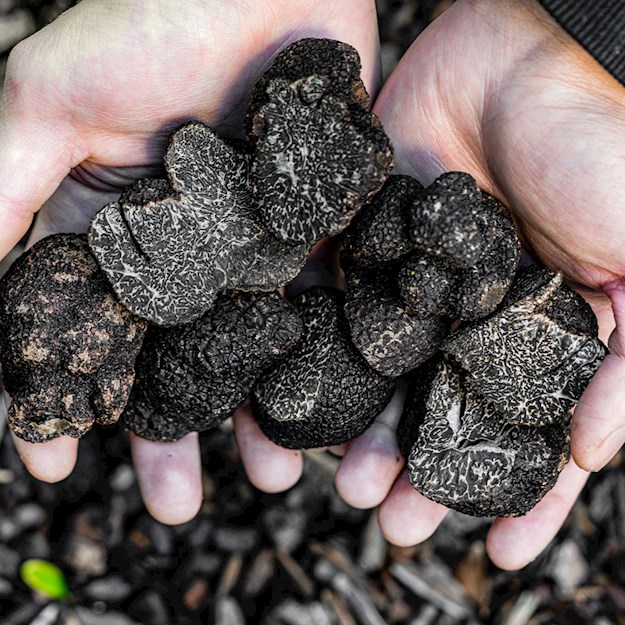 Tuber aestivum is known as the black summer truffle. Large quantities are available almost all year round near the roots of oak, hazel, poplar, beech, and pine trees. They grow near the surface and are relatively easy to find. Their price starts at hundred euros per kilo. It is easily distinguished from the black winter truffle by its interior: while the outer surface is dark, the core is light-colored. The black summer truffle has a very mild aroma and taste.

If you tried a dish with a black summer truffle that had an intense flavor or smell resembling petroleum or garlic, it was again most definitely a scam. Black truffle with no added flavors is so mild you can barely taste it. 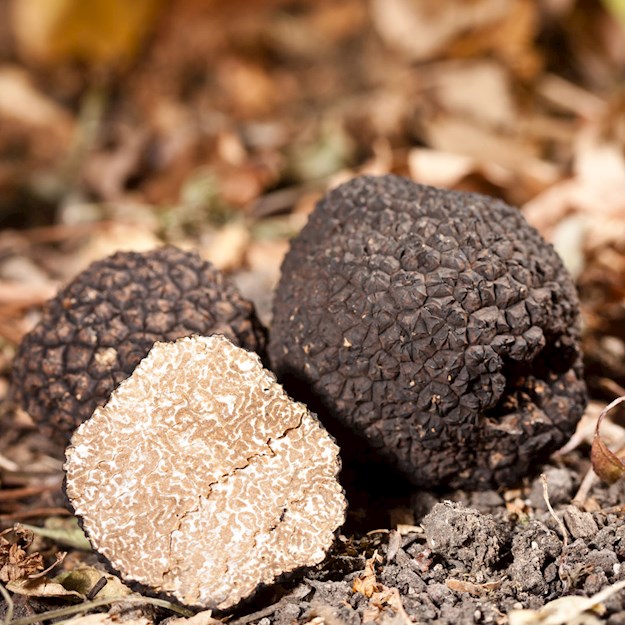 There is also the notorious tuber indicum, the Chinese black truffle, which has flooded the European and American market. It has no taste or smell, and its price starts at less than ten euros per kilo. Visually, it does not differ much from the black winter truffle, and it will often be falsely presented as such, although the flavor and the aroma do not resemble in any way.

This truffle also has a derogatory nickname: potatoes - because the price and taste do not differ much from those of potatoes. If you get a truffle with a dark core during summer, it is also a scam. You’ve probably tried one of the two cheaper truffles. But what you have tasted, thinking you are tasting truffles, was something completely different. 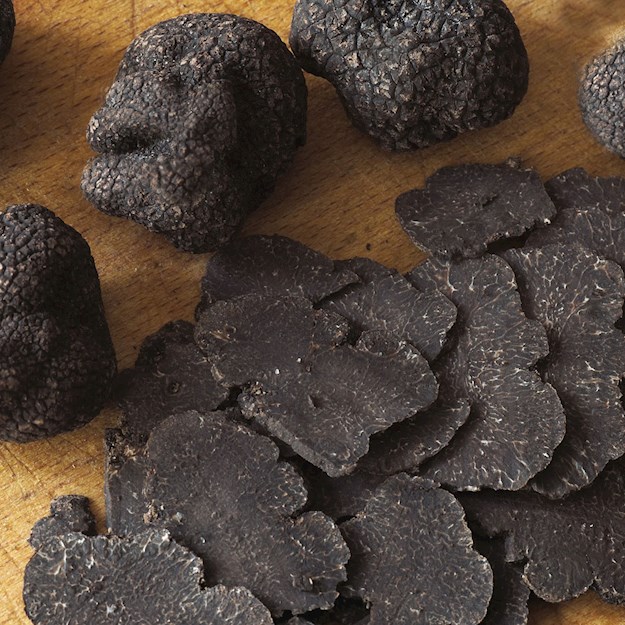 How to serve truffles

An excellent real truffle is mild and expensive. Which means it has to be the king of a dish. There is no point in hiding or masking something that costs hundreds or thousands of euros with other flavors. The only right way to serve truffle dishes is to: prepare a mild, neutral dish (such as pasta with butter) and grate truffles in front of the guest.

In Alba, Italy, this is done as follows: a dish arrives in front of you (you can smell it to make sure it doesn’t have the artificial truffle aroma) together with a waiter with a scale. The waiter weighs the truffle and then grates the truffle on the dish until you say stop. After grating, the waiter will weigh the truffle again and charge you the difference. Outside of Italy and France, this practice almost does not exist. 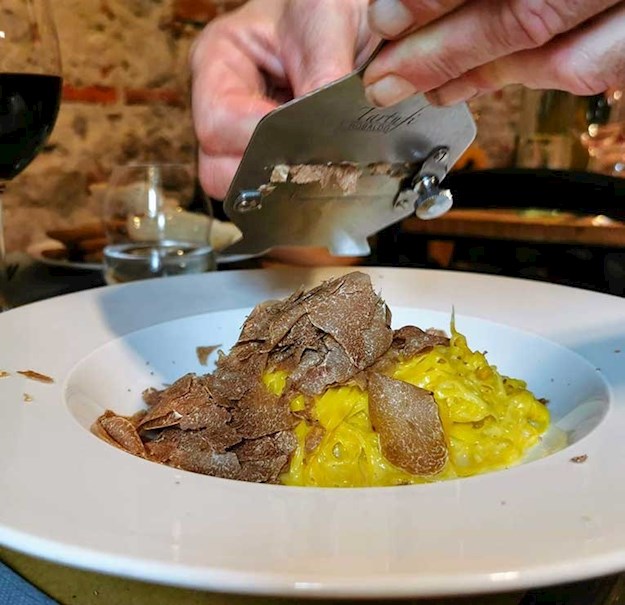 All “truffle” products you can find on supermarket shelves are flavored. The use of the so-called “natural aromas” is a particularly sneaky trick. The artificial flavoring most commonly used in truffle products is the petroleum derivative mentioned at the beginning of the text, meaning “natural aromas” are a marketing ploy to make you believe that the flavor was naturally derived from truffles. It was not, and God knows where it comes from, as no one is willing to reveal the information.

Check the label of any truffle product, and even if they sell the regular truffle in a jar, all of these products contain “aromas” or “flavorings.” This means, without exception, that the flavor does not come from truffles.

The easiest way to deceive naive customers is to add real truffles, of course using the cheapest and completely tasteless varieties, to truffle-flavored products. That’s where the black bits in truffle cheese and 5% of truffles in tartufata come from. 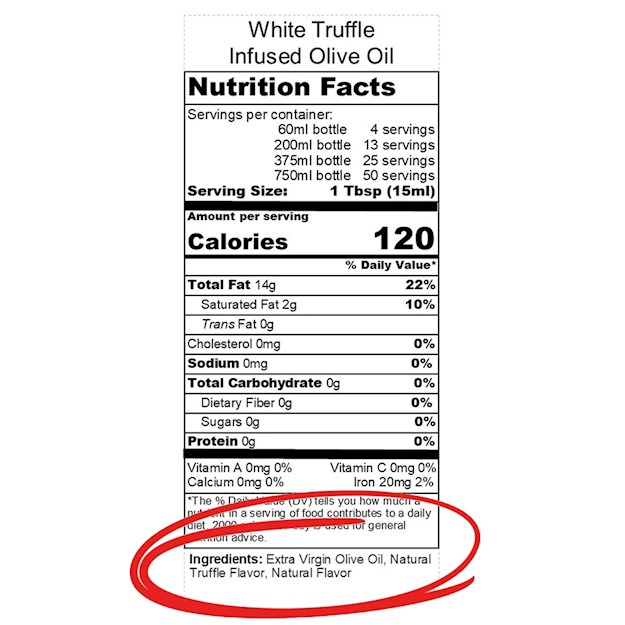 So, what is the problem?

What exactly is the problem with dishes “with truffles”?

You will be served either a dish with tartufata (a sauce made with cream, cultivated mushrooms, cheap decorative truffles, and artificial truffle aroma) or a dish that’s topped with decorative truffle shavings. Still, if you remove the shavings, the fake smell and the fake taste of truffles remain.

This means that the flavor of these dishes does not come from decorative truffles, as the restaurateur wants to convince you, but from artificially flavored cheap oil or butter, which they mix with eggs or pasta. The pieces of cheap decorative truffles are only a facade, so the guest believes the flavor comes from them.

If you were told that your dish has an artificial truffle flavoring (or “natural flavoring” that does not come from truffles) - it is as fair as strawberry-flavored gum. If someone appreciates this, let them be, but it is clear that this is not about quality and gastronomy. And that’s ok as long as they don’t charge you for the strawberry-flavored gum as if you bought fresh strawberries or keep convincing you that they sold you strawberries.

If someone served you an artificially flavored dish and made you think that you are eating a dish with an authentic truffle flavor - you have been deceived.

How to avoid fraud

Always ask restaurant staff if they use truffle flavorings or the real thing: pure truffles. Smell the dish before putting truffles on it and insist that the waiters grate them in front of you.

In any other case, unless you don’t care what you eat, I suggest you leave the facility that is deceiving guests and causing long-term damage to the honest chefs and truffle hunters, your stomach and palate, and gastronomy in general. The truffle industry is a big scam. Not just truffle oil, everything

You may be familiar with the truffle oil scam, but everything else you think you know about truffles is probably a lie too.

I have no desire to eat truffles. Anything I’ve eaten that is somewhat needlessly expensive doesn’t taste good anyway.

You should stop sticking them in the microwave, @Flee

Microwaves are only for reheating coffee.

I’ve had caviar of various kinds and all that stuff. Meh.

I was at a blind tasting 5 course menu in Oct. Wife and I it was about $325(a normal restaurant is around 100), and everything was locally sourced. Utterly fantastic. Worth the money, but it wasn’t the food that was the cost. It was the preparation.

Side note: Never pass on bison meat. Easily the best meat on this planet that I have tasted so far.

Some say Flee once used a microwave…NOT ON FULL POWER, a culinary king to behold.

see I knew it was you.

There are other levels of power?!

Never pass on bison meat. Easily the best meat on this planet that I have tasted so far.

Agreed, in terms of Bovine, although you’ve obviously not had slow roasted wild boar (has to be bred in hot climate)

There are legends of old that do suggest this to be the case, though no one I know has ever proved they exist.

Santa bought one of these down the chimney for me this year, among a gazillion (well 15) other things it will braze then pressure cook then roast all at once. I challenge your slow roasted lamb. 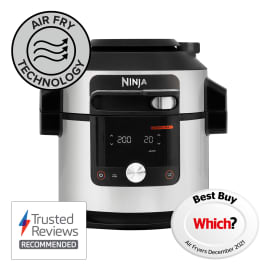