The mystery of Siberia’s exploding craters 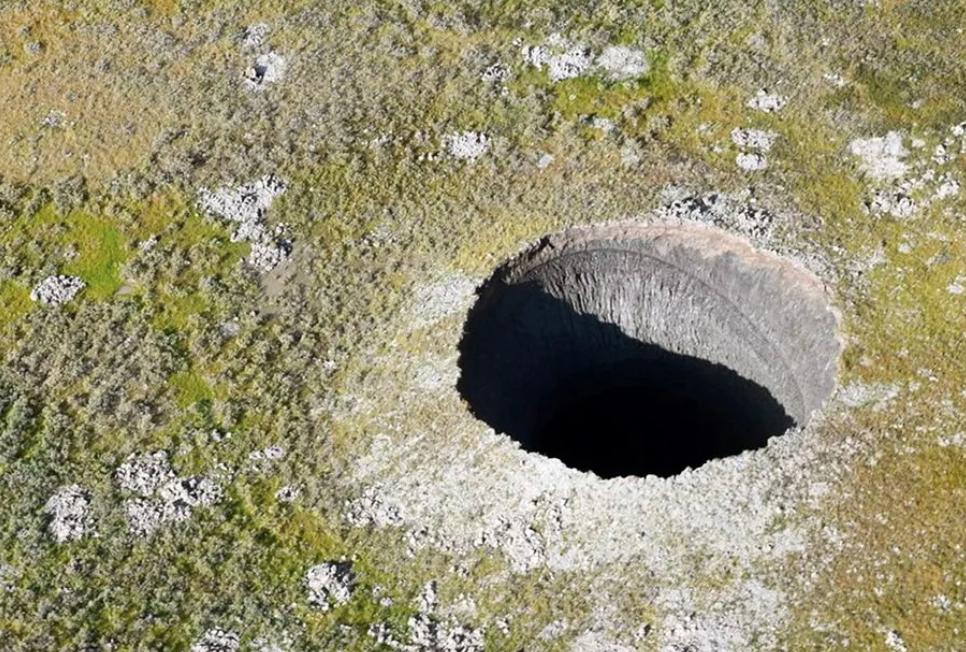 On a remote peninsular in the Arctic circle, enormous wounds are appearing in the permafrost – as something that is worrying scientists bursts out from underground.

It appeared suddenly and explosively, leaving a ragged pockmark on the landscape.

Around the crater’s edge, the earth is a torn, grey jumble of ice and clods of permafrost. The roots of plants – newly exposed around the rim – show signs of scorching. It gives some idea of just how violently this hole in the middle of the Siberian Arctic materialised.

From the air, the freshly exposed dirt stands out against the green tundra and dark lakes around it. The layers of earth and rock exposed further inside the cylindrical hole are almost black and a pool of water is already forming at the bottom by the time scientists reach it.

Among them is Evgeny Chuvilin, a geologist at the Skolkovo Institute of Science and Technology, based in Moscow, Russia, who has flown out to this remote corner of the Yamal Peninsula in north-west Siberia to take a look. This 164-foot-deep (50m) hole could hold key parts of a puzzle that has been bothering him for the past six years since the first of these mysterious holes was discovered elsewhere on the Yamal Peninsula.

That hole, which was around 66ft (20m) wide and up to 171ft (52m) deep, was discovered by helicopter pilots passing overhead in 2014, around 26 miles (42km) from the Bovanenkovo gas field on the Yamal Peninsula. The scientists who visited it – including Mariana Leibman, chief scientist of the Earth Cryosphere Institute, who has been studying the permafrost in Siberia for more than 40 years – described it as an entirely new feature in permafrost. Analysis of satellite images later revealed that crater – now known as GEC-1 – formed sometime between 9 October and 1 November 2013.

The latest crater was spotted in August this year by a TV crew as they flew past with a team of scientists from the Russian Academy of Sciences during an expedition with local authorities in Yamal. It brings the total number of confirmed craters to have been discovered on Yamal and the neighbouring Gydan Peninsula to 17. The mystery of Siberia’s exploding craters

On a remote peninsular in the Arctic circle, enormous wounds are appearing in the permafrost – as something that is worrying scientists bursts out from underground.