We learn history through the prism of the lives of charismatic leaders and the ideologies they preached. But over time, biographies turn into myths and the ideas turn into slogans; the complex and chaotic reality becomes a fairy tale of predestination and valor, as told by whoever prevailed on the battlefield.

Our belief in the power of personalities and ideas may blind us to fundamental truths: after all, every year, another penniless revolutionary pens a new version of Das Kapital or a new version of Mein Kampf. There is some invisible force that relegates most of them to the dustbin of history, and puts others at the forefront of the world’s most consequential or most reviled regimes. To get a sense of this force, I sometimes turn to the history of things: the insights into the needs, the desires, and the fears of regular people caught in the crosswinds of history, as told by the items that accompanied them in their everyday lives.

From that perspective, the story of money is a particularly fascinating one: the decline of the world’s greatest ancient empires is drily chronicled by the shrinking weight and purity of the coins they left behind, while the misery of the Weimar Republic in the interwar period is plain to see in the stacks of worthless trillion mark bills that lined the streets.

Some 28 years ago, I experienced one such currency crisis first-hand: in my home country of Poland, many decades of oppression and economic blight culminated in a bout of hyperinflation that caused consumer prices to jump some 600% in a matter of months. I wanted to show the now-worthless banknotes from that era to my kids - a sort of a gimmicky teaching prop. This sent me down the rabbit hole of first stumbling onto, and then looking for, other examples of hyperinflationary banknotes - finding some that are well-known, and some that remain quite obscure: 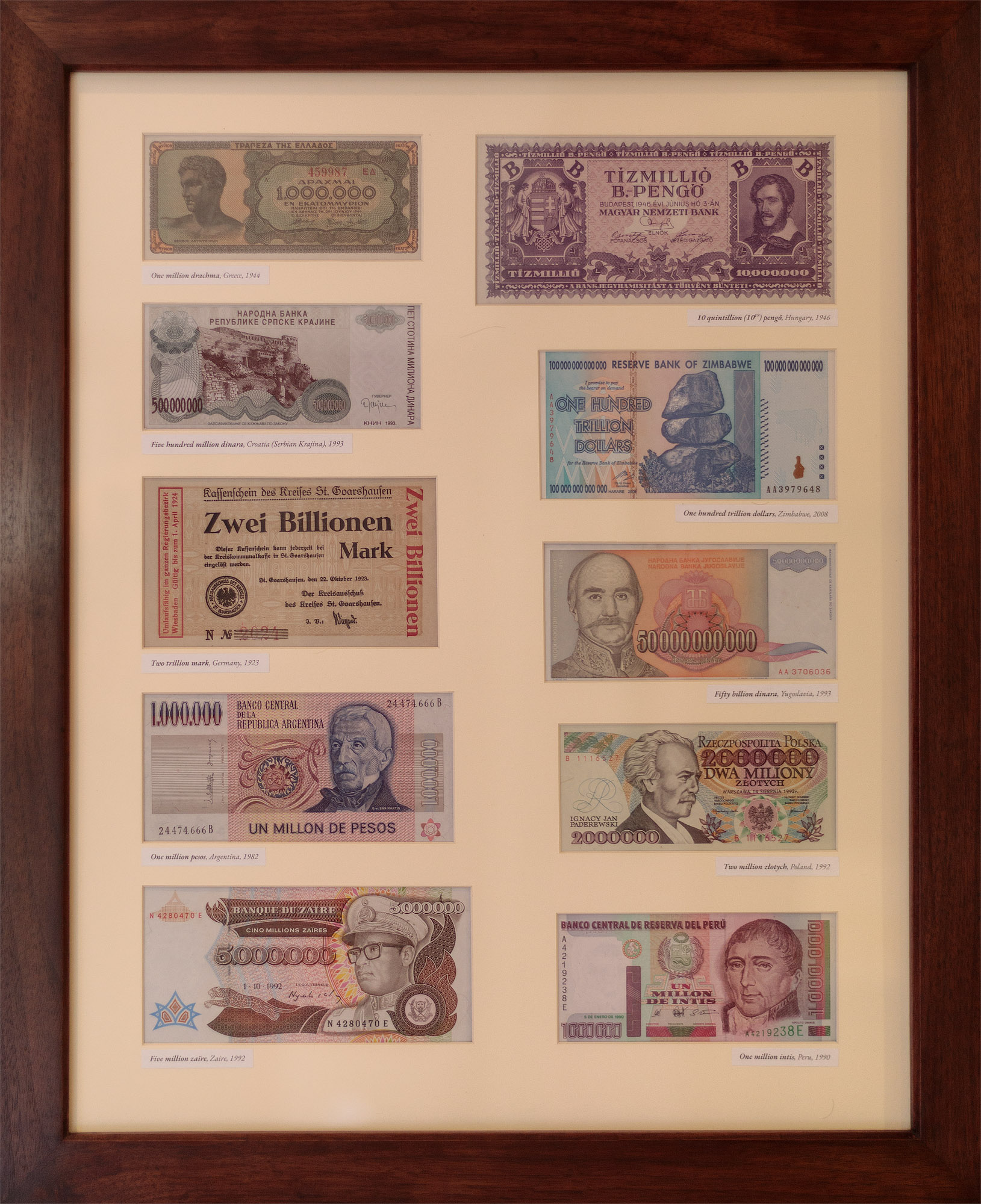 Despite being quite content with this display, my curiosity got the better of me, and after spending a bit omre time on eBay and in other corners of the Internet, I came up with some additional examples of currencies that joined the “one million club”. My second hunt netted this haul: 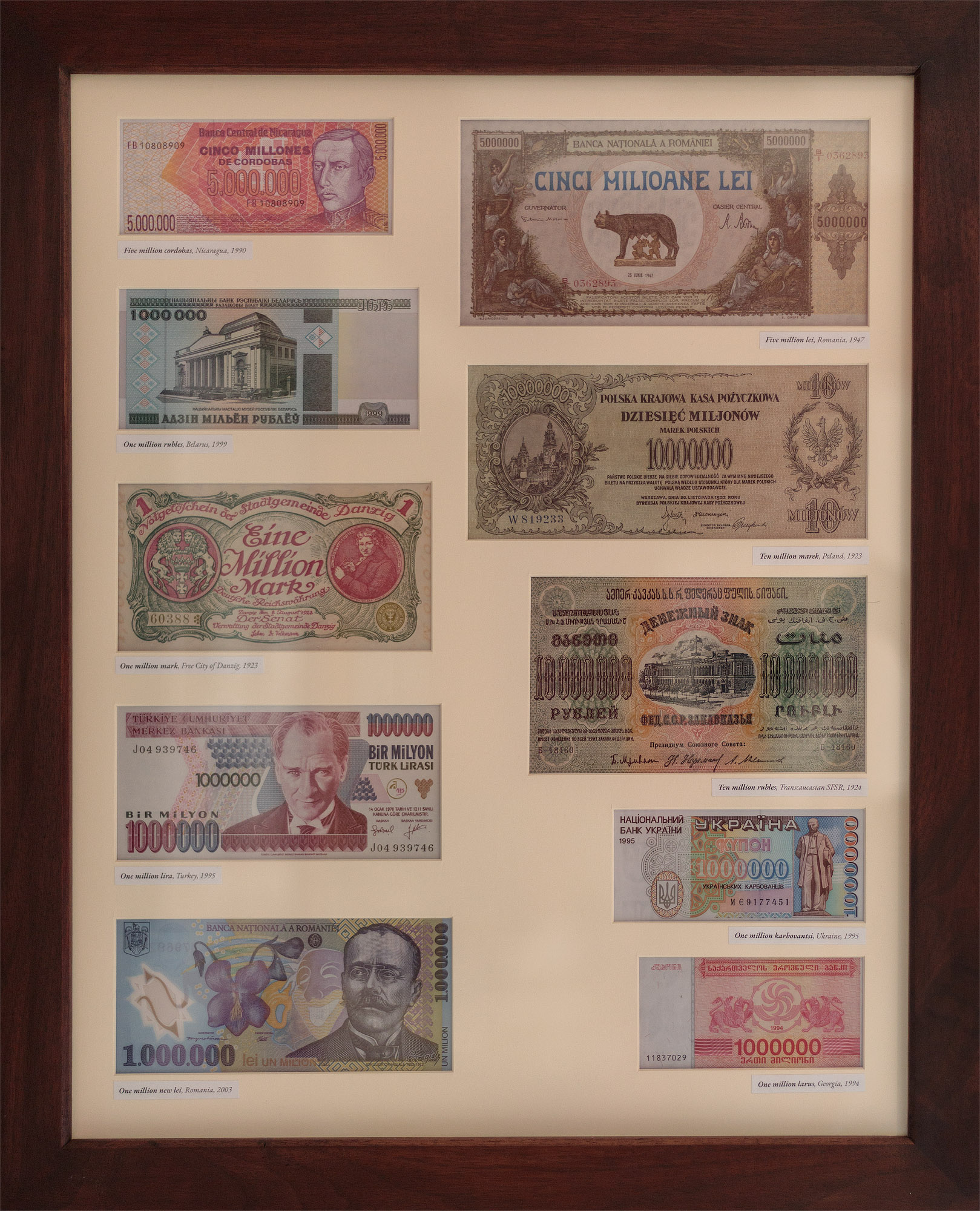 But wait, there’s more! I still had several banknotes I simply couldn’t cram into these two frames: 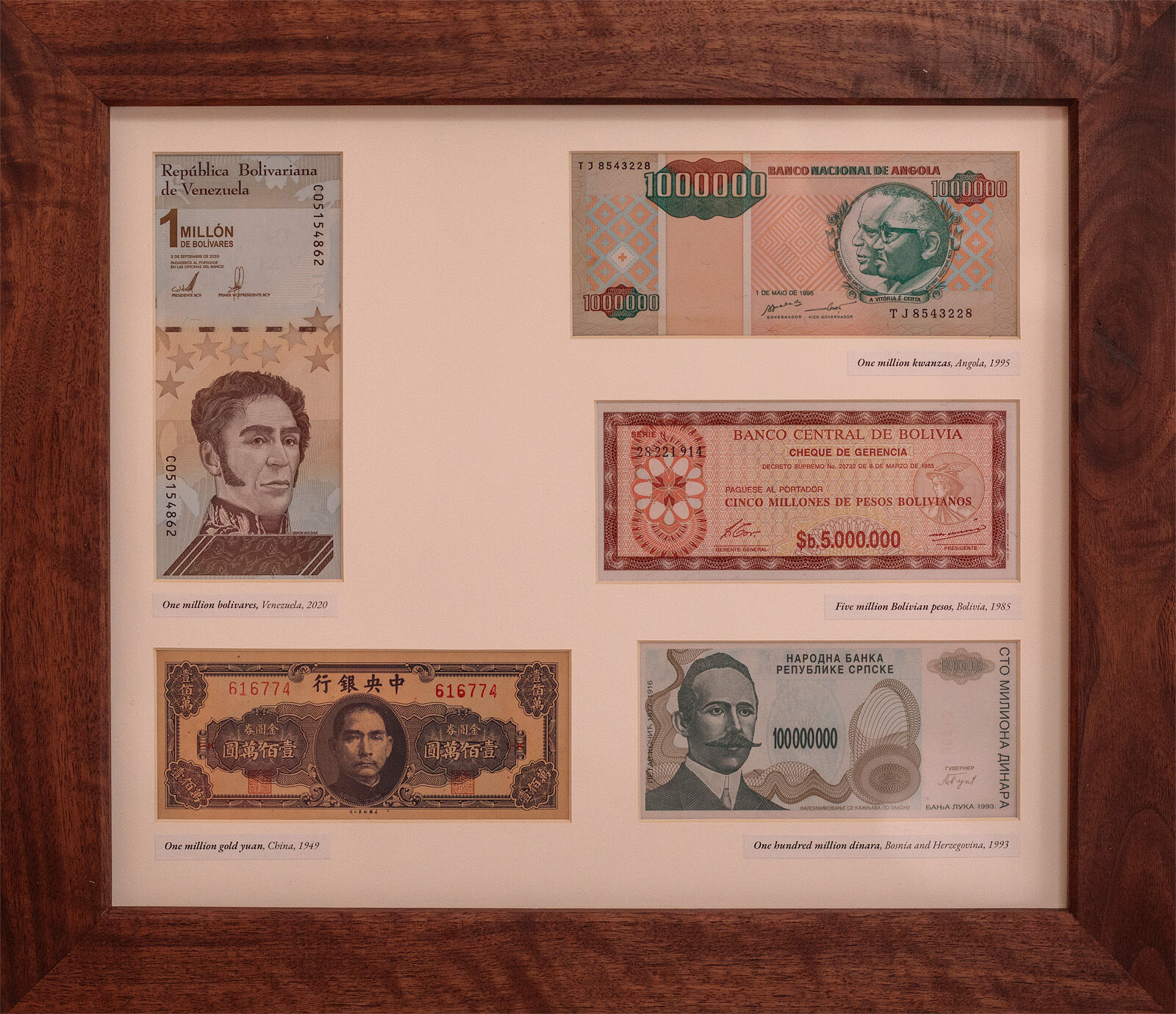 Many other countries avoided the stigma of joining the “million club” by repeatedly shaving zeroes off their currencies (a process called “redenomination”), or by getting their inflation problem under control in the nick of time. I found quite a few examples of currencies that made it into the hundreds of thousands - probably necessitating some more framed displays to be built: 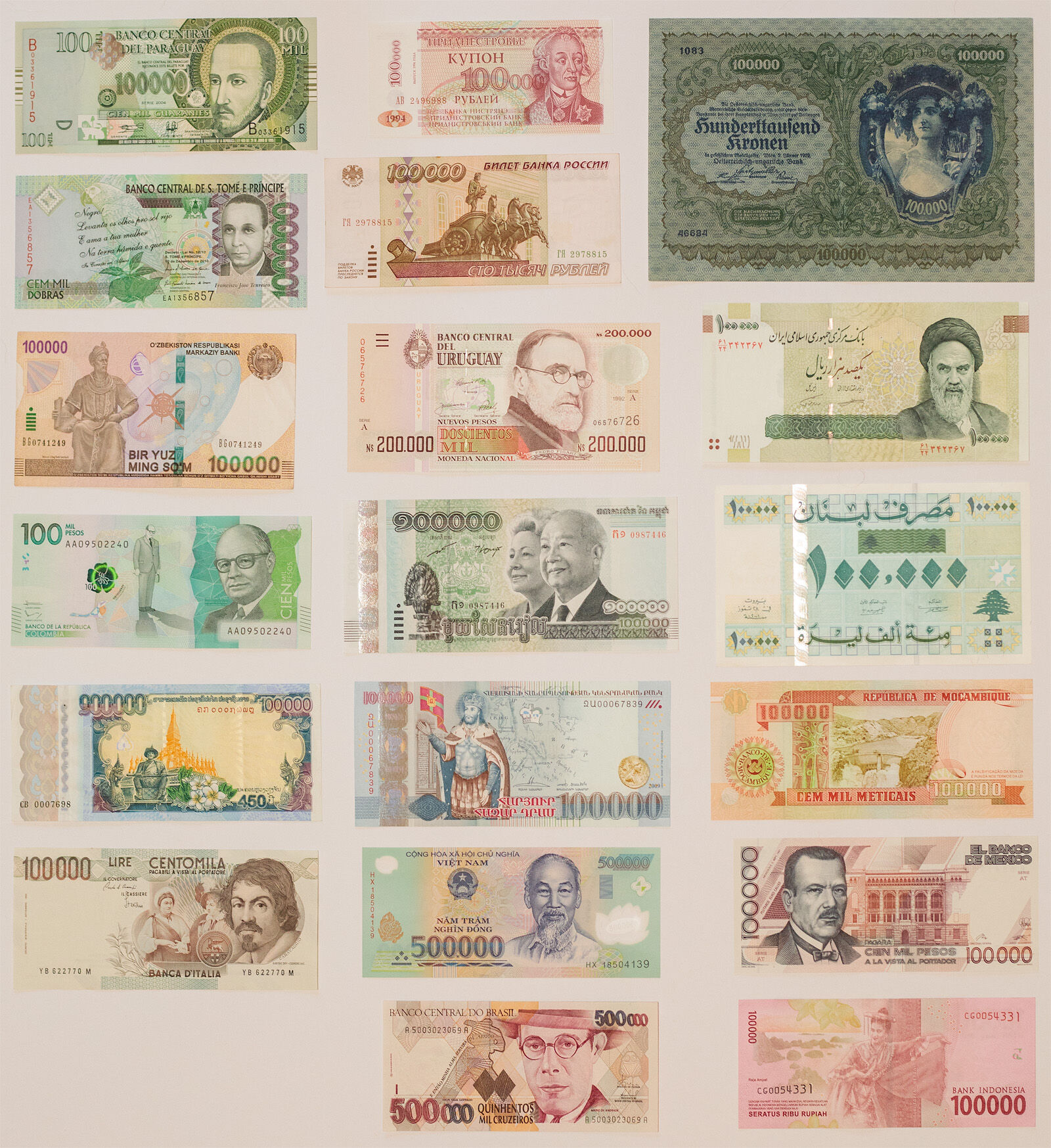 It is worth noting that most of these notes are of little interest to serious collectors: in numismatics, scarcity is everything, and money printed in vast quantities does not have much appeal, except as a keepsake or a gag gift. What is weirder is that the currencies seem to be of little interest to economists, too. One would expect the study of hyperinflation to be one of the cornerstones of monetary policy, but most of the sources cite just a handful of well-known episodes - Hungary, the Weimar Republic, Venezuela, Zimbabwe - and there are scarcely any works that systematically assess the causes and the incidence of such events throughout the years.

After quite a bit of digging, the best source I could find was an obscure and seldom-cited “working paper” put together by the libertarian Cato Institute in 2012. The authors repeatedly bemoan the absence of reliable sources on this topic, even for incidents that occurred fairly recently and in the developed world. For example, for the former country of Yugoslavia, they have this to say:

“For months, we pored over reports from the International Monetary Fund (IMF), the World Bank, the U.S. government, the Central Bank of Bosnia and Herzegovina, and Bosnia and Herzegovina’s Federal Office of Statistics (FZS), and we were still unable to find the monthly data. We also consulted numerous officials from local and international agencies, but, by all accounts, the information had simply not survived the war.”

In the end, the researchers unearthed a total of 56 episodes of hyperinflation, many of them previously unreported in English-language works. It needs to be noted that the criterion used in their paper is very strict: a consumer price increase of at least 50% in a month. This excludes countries such as Israel, Vietnam, or Italy, even though they experienced many years of very steep inflation - and in the latter two cases, ended up with banknote denominations all the way up to 500,000.

Hyperinflation and societal turmoil go hand-in-hand; the episodes highlighted in the paper - and showcased above - are often associated with the rise or fall of authoritarian regimes and with civil war; communist and socialist systems account for about one half of the total, but right-wing dictatorships have a strong showing, too. Overall, you can clearly identify several major clusters: the fallout from the collapse of the USSR is by far the largest one, robbing dozens of already-moribound economies of their competition-free Eastern Bloc markets and exposing them to the realities of free trade. The run-up to and the aftermath of WWII forms another cluster - perhaps a more consequential but also a much smaller one. And in the past several decades, the haphazard fiscal policies and the civil struggles in South America and Africa come to dominate the list.

But the most surprising realization? All but one of the documented episodes of hyperinflation occurred in the last 100 years.