“There’s somethin’ weird and it don’t look good/Who ya gonna call?” In the 1984 movie the answer, of course, was “Ghostbusters!” In the more sedate world of 20th century history the answer might be Sean McMeekin. An accomplished, fearless and enthusiastic “Myth-buster”, he hunts out the mistaken explanations of the past.

Now McMeekin, professor at Bard College, New York, turns his spotlight on the second world war with Stalin’s War. Revision helps to keep historians employed and we should always be ready to reassess the past and challenge popular misconceptions. He is right that we in the west tend to focus far too much on the role of the British empire and the US and ignore or downplay the enormous contribution to victory made by the Soviet Union as well as the horrors of its system. And he goes further still to argue that Britain and the US made a hideous mistake in backing Stalin so fully and letting him get away with so much.

True, as McMeekin admits, the Soviets tied down and wore out the Germans in the east — and suffered appalling losses as they did so. By the time the war ended at least 20m Soviet citizens were dead and much of the country’s infrastructure was in ruins. Without Britain and America funnelling tons of much-needed materials and equipment to the Soviet Union — from oil to many thousands of aeroplanes, tanks and trucks, as well as, much to McMeekin’s irritation, such things as tea and women’s shoes — the Soviets would probably have collapsed.

If anyone should have known how ill-prepared the Soviets were for war in 1941, it was Stalin

What did the west get in return? Precious little, according to McMeekin. Churchill and Roosevelt failed to use their aid to force Stalin to make concessions, over Poland for example, or to enter the war against Japan earlier. The war’s true victor is Stalin, who emerged after 1945 with a huge new empire in the centre of Europe, increased territories in the Far East and a China that he had made Communist. (Here again we get the old charge, surely discredited by now, that the US somehow “lost” China.)

Among the many myths McMeekin believes are in need of busting is that Hitler bears the greatest responsibility for the war in the east. Rather, Stalin, far from foolishly trusting Hitler, was planning war on the Führer even though their two countries were nominally friends and he was only forestalled in the summer of 1941 by Germany’s launch of Operation Barbarossa. The evidence put forward as proof of serious war plans — which includes the memoirs of a Soviet defector in the 1970s or a statement by Stalin at the end of a drunken evening in the Kremlin in May 1940 to the effect that his armed forces were now going to fight offensively in war — is perhaps less conclusive than McMeekin assumes and the debate is by no means over. And if anyone should have known how ill-prepared the Soviets were for war in 1941, it was Stalin, who had purged the armed forces of many of their officers and who was desperately trying to increase production of scarce war materials.

Stalin’s War book jacket
McMeekin is a formidable researcher, working in several languages, and he is prepared to pose the big questions and make judgments. He does not spare the incompetence of Stalin as a strategist or the reckless disregard for life of the Soviet commanders. The story of the war itself is well told and impressive in its scope, ranging as it does from the domestic politics of small states such as Yugoslavia and Finland to the global context. It reminds us, too, of what Soviet “liberation” actually meant for eastern Europe.

His Stalin is cunning, shrewd and playing the long game with great skill. It is a pity therefore that we get relatively little on Stalin the man, his ideas and his world view. By contrast, Roosevelt and Churchill are presented as naive, foolish, obsequious or worse. They were “intoxicated” with Stalin and bribed, appeased and grovelled before him. They fell for the advice of those, such as the American Harry Dexter White, who were later unmasked as Soviet agents or, as McMeekin would have it, the fellow travellers or dupes, Sir Stafford Cripps, British ambassador to Moscow, or Roosevelt’s trusted adviser, Harry Hopkins.

Churchill clung too long to the illusion that there was a good and a bad Stalin, and Roosevelt wrongly thought he could charm the dictator

When we look at the past we must always remind ourselves of what were the real choices before decision makers. McMeekin, in his eagerness to persuade the jury, relies too much on counterfactuals. Was the Soviet war against Finland in the winter of 1939-40 really a key turning point when Stalin’s march to world power might have been halted, perhaps Hitler’s in Europe too? While there was much sympathy around the world for the tiny country battling the Soviet colossus, the likelihood of France and Britain leading a coalition to wage war on both Germany and the Soviet Union and in partnership with Spain, which had just ended its civil war, an Italy firmly in the fascist camp, a Hungary tilting to Germany, and a still isolationist US — even the adherence of Turkey was “far from fanciful” — is, to put it mildly, improbable.

Yet another charge for the prosecution is that Churchill and Roosevelt should have cut back resources sharply to the Soviet Union once the tide of war was turning and diverted war material to their own forces. The Americans and British could have done a lot better and more than the Normandy landings in 1944, striking north from Italy or landing in the Balkans to roll back the Germans.

Furthermore, Churchill and Roosevelt had to keep the war with Japan in mind. They may have been wrong to think that they needed Soviet support but then it is easier to see in hindsight how depleted the Japanese were by 1944. And, yes, Churchill clung too long to the illusion that there was a good and a bad Stalin, and Roosevelt wrongly thought he could charm the dictator, but both men knew they had little choice but to work with him to defeat Hitler.

McMeekin is right that we have for too long cast the second world war as the good one. His book will, as he must hope, make us re-evaluate the war and its consequences. A warning, though. In looking at the decisions and compromises with Stalin made by the British and Americans, let us remember what they faced and consider the possible and not, like the movie, the fantastic. 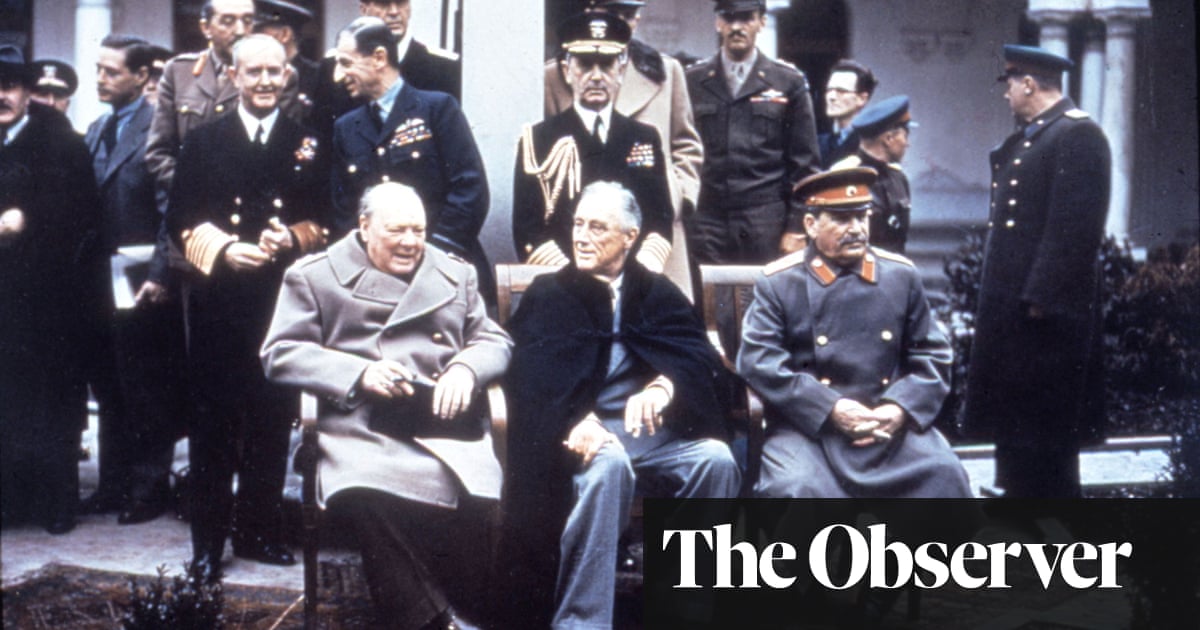 Stalin's War by Sean McMeekin review – a revisionist take on the second...