Despite the availability of more legal streaming options than ever before, TV show and movie piracy are on the rise. Increased fragmentation in the streaming landscape paired with high costs is driving people to illegal options. According to data from piracy tracking company Muso, Netflix content is now good for 16% of all piracy traffic. 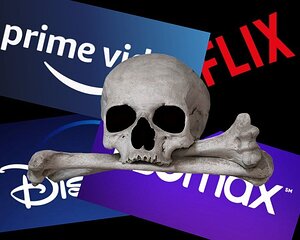 pirate stream900×720 77.4 KB
As the first major legal subscription streaming service on the Internet, Netflix paved the way for a streaming revolution.

The company began competing with piracy from the get-go, branding itself as a superior alternative. In the early years, the strategy paid off.

In the years that followed the legal streaming landscape became more crowded. Inspired by Netflix’s success, new streaming portals such as Amazon, Disney+, HBO Max, Hulu, Paramount+, and Peacock started competing for a share of the lucrative streaming market.

The media often refers to this competition as the “streaming wars,” but the real threat may not come from legal streaming services but illegal pirate sites.

The suggestion that “subscription fatigue” may motivate people to start pirating again isn’t new. We have highlighted this issue in the past and it has been confirmed by research, but it’s now reaching a point where it’s hard for Hollywood to ignore.

Piracy is Appealing Once Again

In an op-ed, MUSO CEO Andy Chatterley highlights that increased fragmentation in the streaming ecosystem, paired with higher prices, is starting to make piracy more appealing again. And without an option to pay for everything, people are seeking out alternatives.

“[F]aced with an increasingly fractured streaming landscape, the consumer does the math and realizes that having access to all the shows they want to watch is not a justifiable expense when their grocery bill has doubled and they’re cycling or carpooling to work to save money on fuel,” Chatterley says.

“And in the absence of a one-stop shop like Spotify is to music lovers, and now that piracy sites have evolved to become sophisticated, easy-to-use experiences, people who have never resorted to piracy before are finding it more appealing than ever. Everything you could ever want to watch, all in one place, only a few clicks away and all for free. What’s not to like?”

Chatterley notes that copyright holders should be aware of this potential shift in user behavior, which is backed up by data. Earlier this year Netflix reported that its subscriber numbers had dropped for the first time in history and piracy continues to grow.

According to MUSO’s data, Netflix content was good for an 11.4% U.S. piracy market share in June. Globally, this number is even higher, with Netflix content making up 16% of the worldwide piracy demand.

“Now, imagine if they could convert those pirate consumers into paying customers,” Chatterley comments.

MUSO’s messaging is in part out of self-interest as the company offers piracy insights as a commercial service. This is serious business for Muso. Just last week the company announced that it had secured a $3.9M investment from Puma Private Equity.

That said, the fact that a company working with several Hollywood players is prepared to highlight the dangers of too many subscriptions is quite something. Especially when that company started as a fairly traditional anti-piracy outfit roughly a decade ago.

Instead of pointing a finger at pirates, Chatterley focuses more on the shortcomings of the TV and movie industry. Piracy can be lowered by offering a one-stop solution for a fair price but somehow that seems to be a pipe dream.

“By offering a service that is both comprehensive and good value for money, you render piracy a much less attractive option,” he writes.

“But with content providers investing billions in their platforms and determined to keep their shows exclusive to them, this seems fanciful. And so the drop off in subscribers seems set to continue, with piracy sites continuing to welcome them with open arms,” Chatterley concludes.

Despite the availability of more legal streaming options than ever before, TV show and movie piracy are on the rise.