Google Drive is flagging text files that only contain a “1” or “0” as copyright infringements. These seemingly harmless bits are automatically targeted by the storage platform’s filtering algorithm, apparently for a terms of service violation. As if that’s not drastic enough, there is no option to challenge this arbitrary decision. 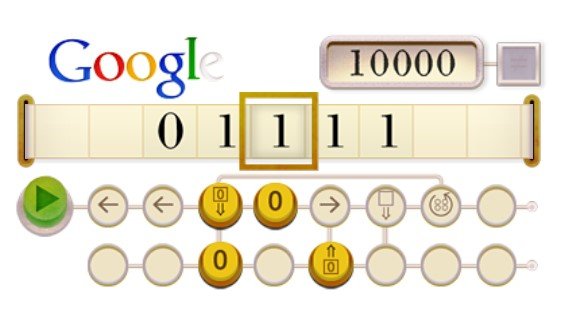 The entire digital world is made up of binary code, often 1’s and 0’s. When you piece enough of them together, beautiful things can be created.

By themselves, these two numbers are not that impressive. However, Google Drive appears to see them as a threat of sorts.

Yesterday, Dr. Emily Dolson, an Assistant Professor at Michigan State University studying eco-evolutionary dynamics, noted that the storage platform had flagged one of her files.

It is no secret that Google uses automatic hash recognition to scan for copyright-infringing content. In this case, however, it was nothing more than a text file containing the number “1”. The name of the file is “output04.txt” which doesn’t sound any alarm bells either.

Still, Google determined that the file represented a copyright-related terms of service violation and prevented it from being publicly shared.

“Uh, @googledrive, are you doing okay? This file literally contains a single line with the number “1”,” Dolson wrote, later adding that this is “extra funny” because the file was uploaded to share during an algorithms class. 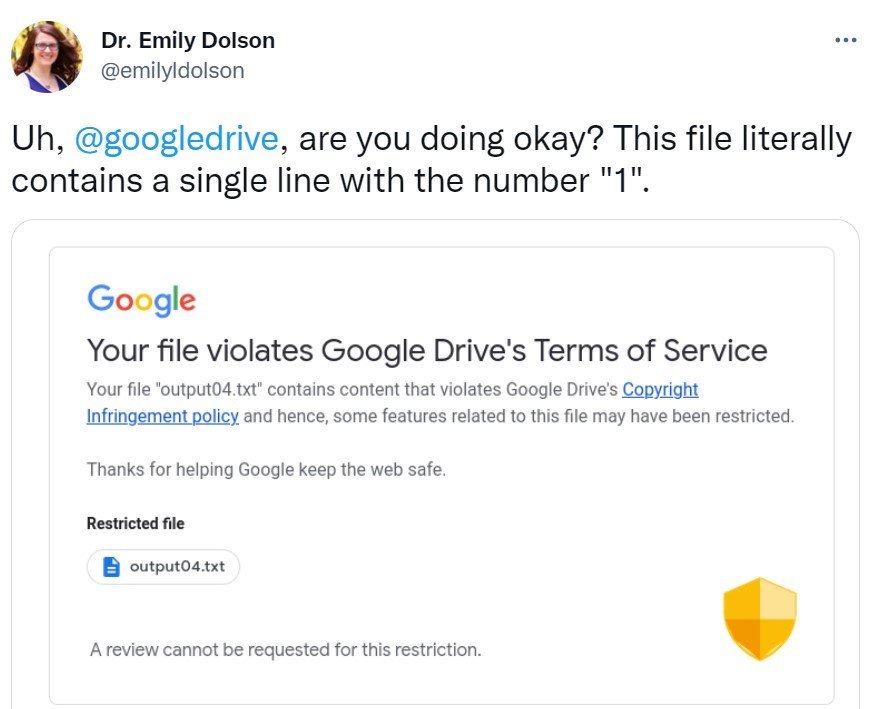 Initially, we assumed that this was some kind of isolated issue. However, a thread on Hacker News showed that it is actually quite easy to replicate. As it turns out, pretty much all text files containing a single “1” are automatically flagged as copyright infringement if they’re publicly shared.

Intrigued by these findings we tried to replicate them and, within an hour, multiple single-digit text files were indeed flagged. Taking it a step further, we also added a text file with just a “0”. This file was also blocked for copyright issues.

“Your file “zero.txt” contains content that violates Google Drive’s Copyright Infringement policy,” Google wrote in an automated email, adding that “a review cannot be requested for this restriction.”

In all cases, the original files remained in our Drive account. However, they can no longer be shared in public. People who try to access them are informed that it’s not available due to a terms of service violation. 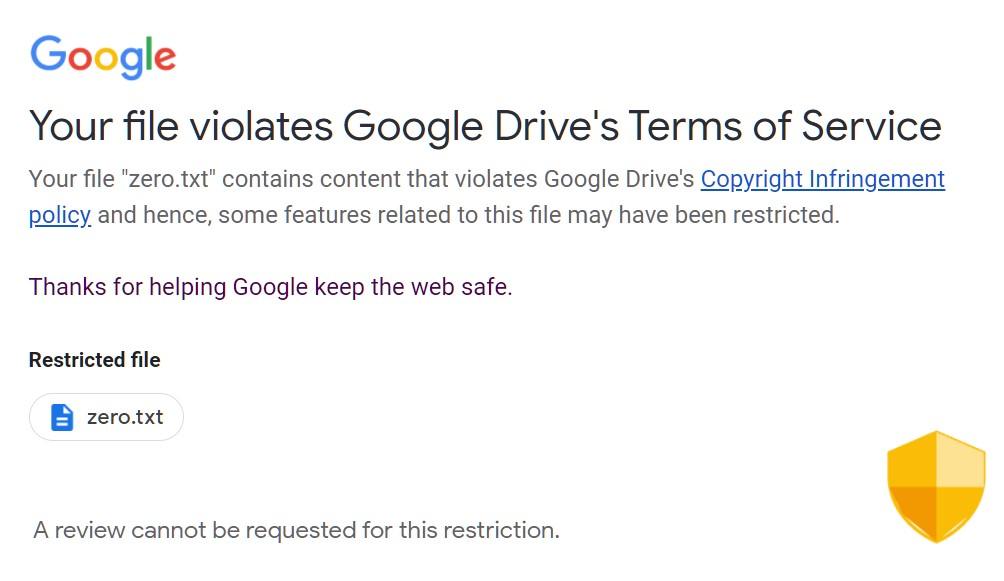 At this point, it’s pretty clear that something’s not quite right at Google Drive. Luckily, the service itself realizes this as well and shortly before publication it responded to the researcher on Twitter.

“Hi Dr. Emily Dolson, thank you for letting us know about this issue! The Drive team is very much aware of this now,” the Google Drive team wrote, adding that they’re working on it.

As is often the case with these types of issues, people with not as much reach and viral exposure as Dolson will have a harder time drawing attention to incorrectly flagged content. Perhaps it might be a good idea to add some kind of appeal or reporting option after all?

When we checked the 0’s and 1’s we uploaded to Google Drive before publishing this article they were all still flagged. We assume that this issue will be solved in the near future but, in the meantime, people can replicate the findings by using zero.txt and freeone.txt.

Google Drive Flags Text Files With "1" or "0" As Copyright Infringements *...

Google Drive's algorithms are flagging text files that only contain a "1" or "0" as copyright infringements.