Election law was not just broken but shattered 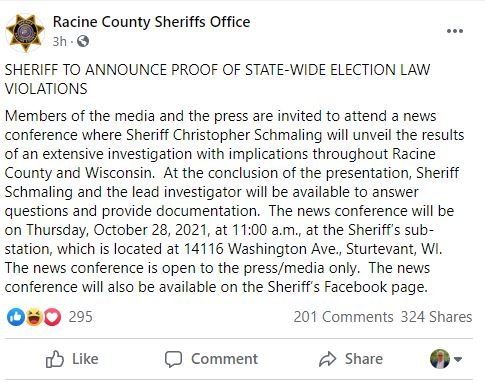 Sheriff Christopher Schmaling promised to unveil the results of an extensive investigation with implications throughout Racine County and Wisconsin.

Sheriff Schmaling said they will be available to answer questions and provide documentation at today’s hearing.

The Gateway Pundit friend and contributor Jefferson Davis attended the briefing this morning.

The press conference will be live at the Racine County Sheriff’s Facebook Page.
(We are currently waiting for the live-stream to start)

Sheriff Schmaling: “You will not hear about our opinion in this investigation. You will see facts… Election Law Was Not Just Broken — But Shattered!… “ 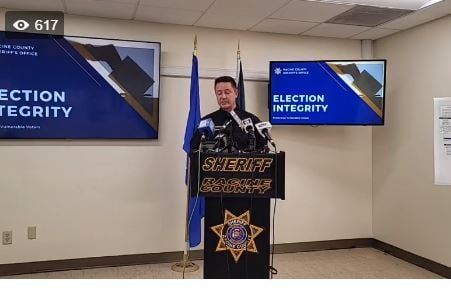 The Racine Sheriff’s Office announced on Thursday they will hold a hearing on Thursday at 11 AM at the Sheriff’s substation. Sheriff Christopher Schmaling promised to unveil the results of an extensive investigation with implications throughout...

Most people know this… but like Hillary said, “At this point what difference does it make”? After the Nevada investigation we now have enough states proving fraud that would push Trump as a winner of the election if the fraud didn’t occur during the most secure election in American history.

We are dealing with Democrats wanting to allow the IRS (after massive expansions) to have access to every bank account over $60, and who want to tax ‘potential but unrealized earnings’ (say a stock you buy at $100/share goes to $700 a share in June, but before you bail on it it drops to $300… you get taxed on a $700 Capital Gains). The first affects EVERYONE with any real mortgage (because you have to pay more than that every month) and the second would absolutely kill the stock market.

I don’t know the remedy, and I would love to hear any Democrat on this site defend Biden at this point. We can start a new thread for that, and I’m not going to be nasty or combative… I will just ask questions about how you really think America is better now than even after a year of COVID (If I wanted to be an ass, I would use 2/19 statistics instead of 2/20). This community is far more informed than most. I have debated Democrats here for decades, and those on this site are very informed and are very skilled debaters (and have challenged me to change my positions a few times on very significant issues) so I really would like to hear your support of Biden after a half of year of his term.