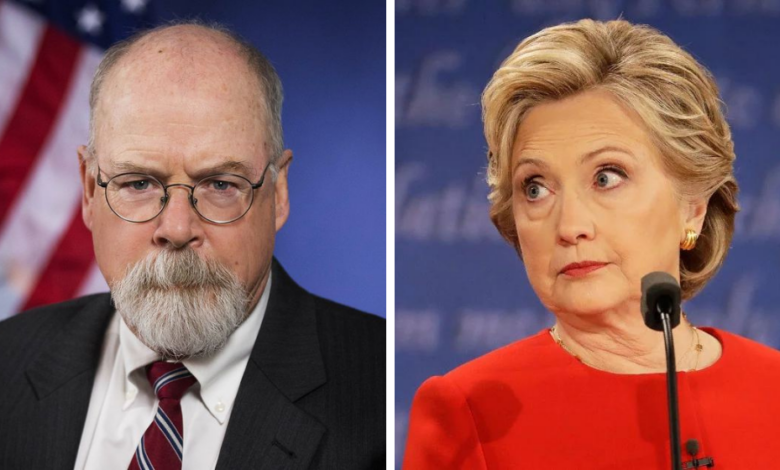 Now, he has issued a new set of subpoenas, including one targeting a law firm tied to Clinton’s 2016 presidential campaign.

“Though the secret server theory did not find its way in Special Counsel Robert Mueller’s report, Durham found discrepancies between Sussmann’s congressional testimony and his interview with the FBI. Sussmann told Congress that he was working for Alfa Bank on a project but told the FBI he was not working for a specific client at the time,” Fox News reported.

“At the same time, Perkins Coie’s internal billing records showed that Sussmann billed the Clinton campaign for the hours he worked on the Alfa Bank project. The law firm’s clients also included the Democratic National Committee, while the firm also hired a research company that produced the dossier from Christopher Steele that accused then-candidate Donald Trump of being compromised by the Russian government,” Fox News added.

Last week, Durham indicted Michael Sussmann — a prominent Democratic lawyer with ties to Hillary Clinton — for allegedly lying to FBI lawyer James Baker during a 2016 meeting about who he was representing when he gave information about Donald Trump and Russia to the bureau.

“Michael Sussmann, a partner with Perkins Coie who also represented the Democratic National Committee in connection with Russia’s hack of the organization, is accused of making false statements during a Sept. 19, 2016 meeting with former FBI General Counsel James Baker,” Reuters reported. “This marks the second criminal case Durham has filed so far since former Attorney General William Barr tapped him in 2019 to investigate U.S. officials who probed the Trump-Russia contacts.”

At this meeting, Sussman reportedly relayed to the FBI the discredited theory that the Trump Organization was communicating with Alfa Bank.

“Any indictment of the lawyer — Michael Sussmann, a former federal prosecutor and now a partner at the Perkins Coie law firm, and who represented the Democratic National Committee on issues related to Russia’s 2016 hacking of its servers — is likely to attract significant political attention, the New York Times reported.

The NYT states: “Mr. Baker, the former F.B.I. lawyer, is said to have told investigators that he recalled Mr. Sussmann saying that he was not meeting him on behalf of any client.”

Sussman told a different story with his testimony to Congress and his own billing records.

Sussman’s lawyers have even acknowledged “they expected him to be indicted.”

Back in 2020, Durham impaneled a grand jury relating to the false Alfa Bank/Trump Organization story.

@nytmike
NEW: Prosecutor John Durham has told a cyber lawyer -- who works for the firm that repped Clinton campaign -- that he wants to indict him on suspicion of lying about who he repped when he told F.B.I. in '16 about potential ties b/w Trump and Russia. https://t.co/KiSUIeGuzh

Durham is presenting evidence to a grand jury regarding his investigation into the origins of the Trump-Russia investigation.

Durham’s final report is expected to be completed in the coming months.

Republican Rep. Devin Nunes, the ranking member of the House Intelligence Committee, argued a month ago that he expects Durham to release a “damaging report” on the FBI’s failed investigation into Donald Trump’s alleged ties with Russia.

Nunes asserted at the time that prison sentences could fall on a number of former senior Obama officials.

This should terrify Democrats.