The first gunshots seemed to come down the mountain on the other side of Arizona’s border fence with Mexico, just east of Arivaca, where rival drug cartel factions battle to the death for supremacy.

They were hunters, no doubt, though not the kind you would typically expect.

“Where exactly do you think the shots are coming from?” I asked Sam nervously from the back seat of his pickup truck.

“I think they’re to the right,” Sam said, focused on the nearest mountain. “They could be on top of that big peak as well.” 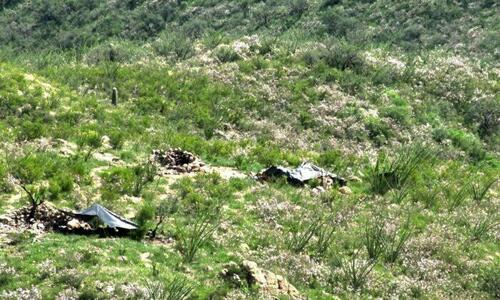 Members of a rival Mexican drug cartel were set up less than a half mile over Arizona’s border with Mexico on Aug. 25, as captured in this private security drone footage. (Courtesy private Arizona security company)

It’s not as if we were invisible, clambering noisily up the winding dirt fire road in the border zone known as the California Gulch, part of the Coronado National Forest in southern Arizona.

Our arrival in Sam’s gargantuan white Chevy Silverado on the sweltering morning of Aug. 25 was about as clandestine as a bullhorn in a public library.

“They could be warning shots”—for us, Sam said. “But this is where they’re coming. Right here.”

Sam is the pseudonym he uses to conceal his identity and that of his security company in Arizona. He’s been threatened by the Sinaloa Cartel for conducting border-watching activities. He now fears for the safety of his employees and family.

Below our position, the unfinished Trump border wall and fence stretched east and west for miles, then abruptly stopped. On the U.S. side of the border, cattle grazed among dry clumps of grass or basked in the imperfect shade of sparse shrubbery, swatting flies with their tails.

The jagged peaks on the Mexican side of the steel-grated border fence loomed green and majestic. Strange, though, how nature doesn’t immediately reveal its secrets. Hidden among the Las Guijas Mountains are some of the worst elements of the Sinaloa Cartel, Sam said.

“How strong is your stomach?” Kyle, Sam’s security specialist, had asked me the day before.

The fact that I enjoyed watching gory horror movies was good enough for Kyle to share an actual cell phone video of a man being mauled by two pit bulls in a Mexican border town not far from us.

Unfortunately some things cannot be unseen.

Kyle said that kind of cartel brutality is common in cities and towns on the Mexican side of the border fence. 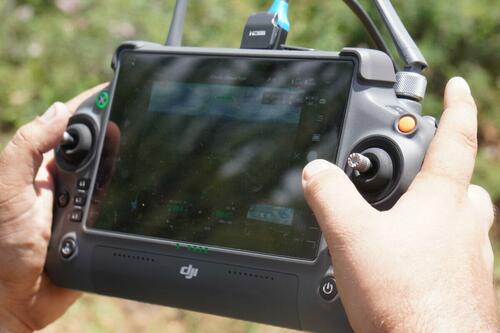 “These guys are battling for control of the Sinaloa Cartel. You have fights within fights,” said Sam, speaking both from experience and professional intelligence gathering.

Sam believes cartel mayhem eventually will spill across the U.S. border in military force, bringing death and destruction to Americans—but not if a coalition of private citizens, law enforcement, and security firms that he envisions has its say.

The real battle, he said, is not about winning hearts and minds.

It’s about matching intel with intel, using superior surveillance techniques and equipment to beat the drug and human smugglers.

For this purpose, Sam’s company recently acquired a $33,000 JTI-branded drone which they frequently use to conduct border reconnaissance missions for clients and law enforcement.

Close-up drone footage shows a rival drug cartel faction member talking on a hand-held radio in an enclose on the Mexican side of the border fence east of Arivaca, Ariz., on Aug. 25. (Courtesy Arizona private security company)

The drone is a beast of versatility equipped with high-definition and thermal cameras, and high-powered zoom lenses.

Kyle operates the drone from the pickup bed using a console and laptop computer for imaging purposes. The drone has a maximum range of five miles traveling at speeds over 48 mph hundreds of feet above the ground. Batteries are interchangeable and last 45 minutes on a single charge.

You can hear the drone yet rarely see it at higher altitudes housed in fortified gray plastic with four propellers to carry it aloft. 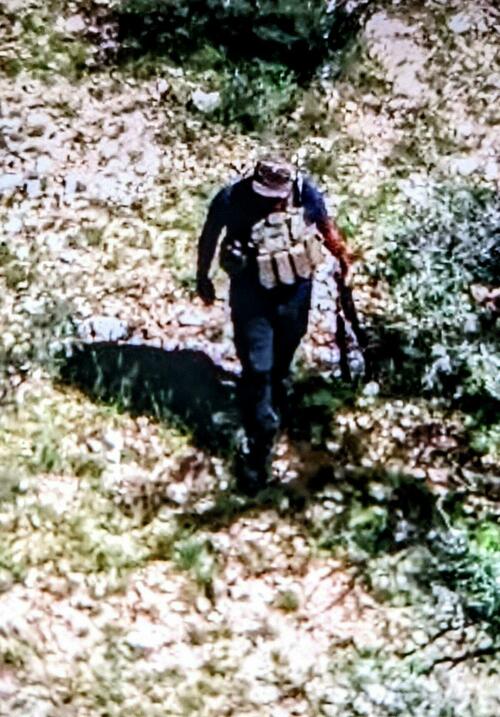 Sam and Kyle’s mission today was to seek out and photograph nearby cartel encampments on Mexico’s side of the border fence.

Kyle took the drone out of a suitcase, then placed it in the middle of the fire road as he prepared for take-off. With the push of a console button, the drone whirred to life, propellers spinning like a supercharged weed-whacker.

Up—up—and away the drone went with the turn of a joystick.

Kyle monitored the action on the console screen while Sam watched on a laptop computer. The rugged mountain terrain below seemed alien in both viewfinders, taking shape when Kyle maneuvered to a lower altitude.

“My guess is there are two factions here,” Sam said. “One is trying to keep [the other] from pushing east, the other west. We think they’re on the peak right below us—oh, there they are!”

One of the factions is Los Chapitos, whose founder is Ivan Archivaldo-Guzman Salazar, alias “Chapito,” a Mexican narco trafficker and son of imprisoned druglord Joaquin “El Chapo” Guzman.

Guzman was head of the Sinaloa Cartel until his arrest and extradition to the United States in 2017. 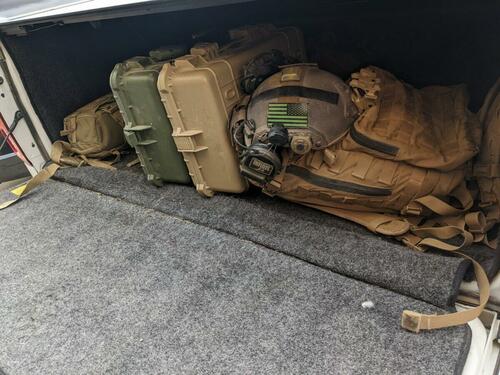 An Arizona private security firm keeps high-tech equipment, including a surveillance drone, secure in heavy-duty suitcases in the back of a company pickup truck on Aug. 25. (Allan Stein/The Epoch Times)

Sam said both factions currently are at war to control the entire Sinaloa Cartel on Arizona’s southern flank.

High above the nearest mountain less than a half mile away, the drone’s camera suddenly spied two blue tarps spaced about 25 yards apart. In one of the tents, a man could be seen talking frantically on a hand-held radio.

As Kyle zoomed in closer, the screen showed another man in body armor walking out of the bush, carrying what appeared to be an AR-15 semi-automatic rifle—definitely cartel.

“We found his [expletive]!” Sam shouted and gave Kyle a fist pump, but it was too soon to celebrate.

At that moment, the man looked up and saw the drone.

He raised his rifle, and took aim. 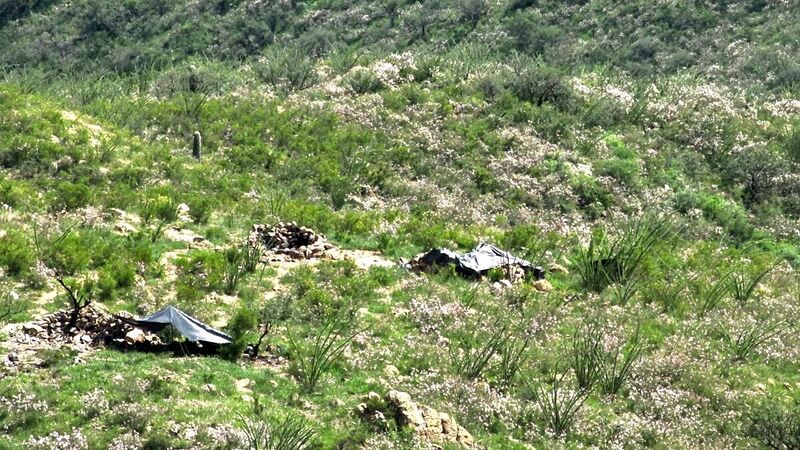 This is the fifth and final article in a series on illegal drug and human smuggling along Arizona's ...