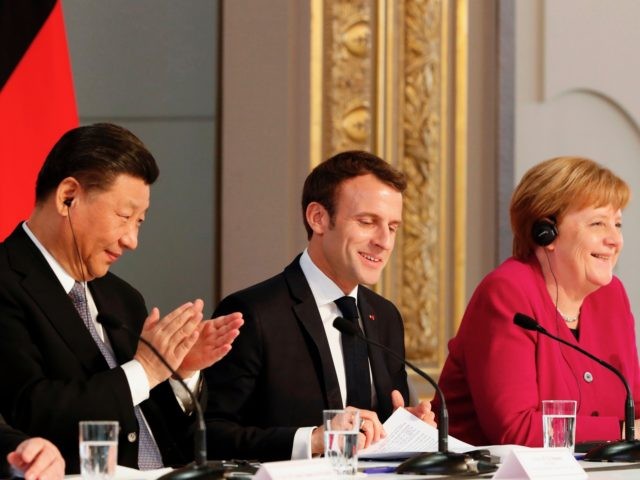 The Chinese state overtook the United States as the European Union’s top trading partner in 2020, as ties between Brussels and the communist dictatorship in Beijing continue to deepen.

During the year in which the coronavirus pandemic was inflicted upon the world through the ineptitude and malevolence of the Chinese Communist Party (CCP), imports from China to the European Union rose by 5.6 per cent and exports of EU goods to China climbed by 2.2 per cent.

At the same time, trade between the European bloc and the United States fell dramatically, in part due to the Chinese coronavirus hampering transatlantic trade. Imports of American goods to the EU fell by a staggering 13.2 per cent, while European exports to the U.S. fell by 8.2 per cent, a report from Eurostat revealed.

The shift in trade reliance means that for the first time, China has topped America as the EU’s chief trading partner, with €586 billion ($709bn/£510bn) exchanged in trade between the bloc and China last year, compared to €555 billion ($672bn/£483bn) in trade with the United States.

European Union leaders are typically reticent to be overly critical of the CCP, yet they did not shy away from criticising the ‘America First’ trade war carried out by the Trump administration against China, which to date has been one of the more aggressive actions taken against the communist government by any American president.

Conversely, EU leaders celebrated the election of Democrat President Joe Biden, who is widely regarded as more friendly towards the Chinese state and whose family has been accused of profiting off of business relationships with CCP connected firms.

The increasingly close relationship between Brussels and Beijing has, however, begun to draw considerable backlash.

Speaking with Breitbart London on Tuesday, the chairman of the Bow Group, Ben Harris-Quinney said: “The EU presents itself as the global arbiter of the ‘rules-based system’, yet they wasted no time in repudiating the democratic decisions of Brexit and Trump as a debasement of their ideal rules, criticising the rise of what they describe as ‘dangerous populism’.”

“They, however, have very little to say on how China is run, and what are very apparent human rights abuses,” he said, adding that therefore it is “no surprise” that trade has ramped up .

The head of the UK’s oldest conservative think tank pointed to the Paris Climate Accords — which America left under the leadership of former President Trump, only to be rejoined under the Biden administration — as another example of European hypocrisy.

Mr Harris-Quinney noted that under the agreement “the West is required to dismantle its industry, but China is allowed to continue to increase industrial development and pollution,” adding that “this unchecked hypocrisy and baffling lack of statecraft” from European leaders have “allowed China to rise and the West to fall.”

The Bow Group chairman said that China’s industrial might is reliant upon trade with Western nations, saying that despite the EU’s penchant for trade rules and regulations, the bloc has given the Chinese dictatorship a pass on its unfair trade practices and human rights abuses.

“At a minimum, it is high time they at least apply the same basic human rights requirements to China as their other major trading partners in return for so much trade. It seems likely however that EU rules will continue to be for thee, but not for Xi,” Harris-Quinney concluded.

Trade between China and the European Union is likely to continue rising, with negotiators agreeing in principle to an investment pact in December that would see an increase of €120 billion in trade.

The EU-China Comprehensive Agreement on Investment (CAI) — which was hastily signed before the inauguration of Democrat Joe Biden, representing one of the first diplomatic challenges for the incoming administration — has been characterised by the EU as the “most ambitious agreement that China has ever concluded with a third country”.

While the bloc has touted that it has achieved alleged “concessions’” from the communist regime, the EU has failed to require that the Chinese government stamp out modern slavery, in places such as the concentration camp province of Xijiang, as a prerequisite for the agreement. Within the deal, Beijing conceded to only “work towards” implementing international labour rights.

The pact, which still needs to be approved by the European Parliament and the governments of individual member states, also fails to mention the issue of human rights in general or the anti-democratic crackdowns in Hong Kong.

Responding to China becoming the EU’s chief trading partner, the founder and chairman of Hong Kong Watch, Benedict Rogers told Breitbart London: “There remains an extraordinary naivety – or willful blindness – within the European Union about the dangers of the Chinese Communist Party regime and the risks involved in being too close or too dependent on it, even despite the COVID-19 pandemic, the Uyghur genocide and the dismantling of Hong Kong’s freedoms.

“The new EU-China investment agreement is one appalling example of that, and the pursuit of further trading relations is another.

“The EU should reassert its values, ensure that any trading relations include high protections for human rights – including stopping slave labour in the supply chains of global brands – and reduce its strategic dependency on China. The EU’s approach to China needs to be completely rethought.” 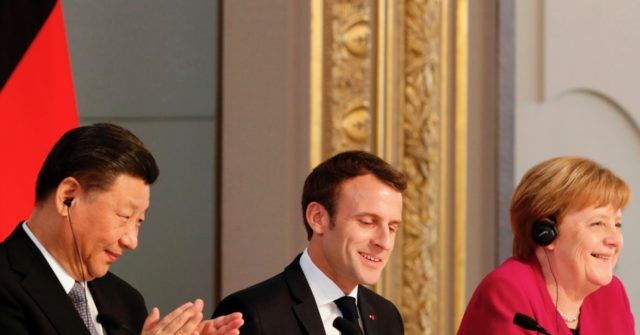 China overtook the U.S. as the European Union's top trading partner in 2020, as ties between Brussels and Beijing continue to deepen.