Addressing the Islamophobia in “Wonder Woman 1984”

Diana and Steve in a taxi with the Islamic pendant (Image: Screengrab)

Turns out, along with being problematic when it comes to consent, Wonder Woman 1984 also features Islamophobia. Sigh! At this point, if you’re out there supporting Wonder Woman 1984 while ignoring or excusing certain narrative issues, I don’t know what to say to you.

Full disclaimer, while I rolled my eyes at Wonder Woman 1984 featuring a Muslim character as one of the bad guys, I didn’t pick up on the blatant Islamophobia during my initial viewing. I got to know about the implications of the scene in question after I decided to head on over to the Muslim side of Twitter.

An action sequence during Wonder Woman 2 occurs in Cairo. Maxwell Lord goes to meet Emir Said Bin Abydos and take over his oil empire. The Muslim character’s wish is to construct a wall and regain control of his ancestral land.

During the final moments, the movie also had a character in mujahideen-looking garb wishing for nuclear weapons.

Yes, it felt weird this movie didn’t have a single Muslim character playing the role of a good guy, especially after the first Wonder Woman had a Muslim character be one of Diana’s friends. But it is what it is. I would like Hollywood to do better, of course.

Now, coming to the most problematic and Islamophobic scene that involved Steve Trevor (Chris Pine). I was surprised when I saw tweets about said scene and how blatantly Islamophobic it was to show Steve swatting away a pendant, inside a taxi, with the name Allah and Muhammad (P.B.U.H) written on it.

Turns out, my mind didn’t even register such a moment. Instead of realizing what had transpired onscreen, apparently, my brain did something and I thought Steve had quickly placed the pendant on the dashboard before crawling out of the taxi to help Diana.

I rewatched the scene and was quite disappointed to see the scene for it was. In my opinion, there was no reason for such a scene to exist. It served no narrative purpose other than Steve being shown throwing away the names of two beings held in high regard in the Muslim community.

Such artistic content uses fictional Muslim characters to challenge the “interpretations” of Islam that continue to be used to encourage hate and discrimination in the real world. At no point does such content (even when certain Muslim characters aren’t being played by Muslim actors) attack what numerous Muslims believe in.

However, in my opinion, seeing Steve throwing away a pendant showcasing names sacred in Islam served no narrative purpose except for adding to Wonder Woman 1984 ‘s Islamophobic and anti-Arab count. 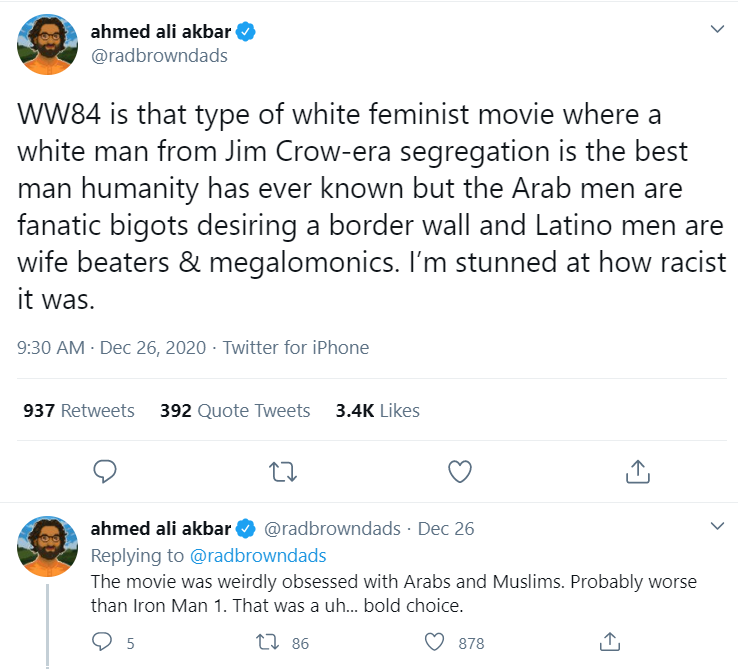 Warner Bros. has greenlit Wonder Woman 3 . Here’s hoping the creative narrative choices are better than what fans of Diana Prince, like me, had to sit through while watching Wonder Woman 2 .

Addressing the Islamophobia in “Wonder Woman 1984” - The Geekiary

Turns out, along with being problematic when it comes to consent, Wonder Woman 1984 also...