A Mom’s Research (Part 1): Nordic Countries Are Not Socialist Paradises 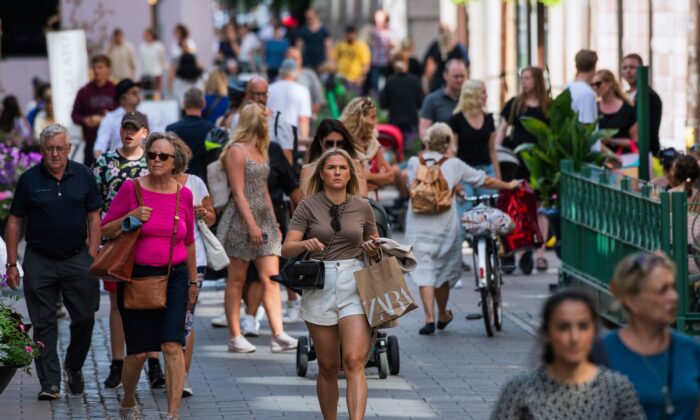 As the mother of a 17-year-old in a deep blue state, I am often asked questions about socialism and communism. Not always being able to answer them, I have to do extensive research. I guess this is the situation many Epoch Times readers encounter: having to discuss these topics with family and friends.

One comment I received: “Yeah, I know communism is bad. But I want socialism, like the kind in Sweden or other Nordic countries.”

Indeed, Nordic countries are often used as models of “good” socialism by leftists, like Bernie Sanders, the Clintons, and Barack Obama. In 2010, National Public Radio praised Denmark as “a country that seems to violate the laws of the economic universe.” Although having high taxes, it had “one of the lowest poverty rates in the world, low unemployment, a steadily growing economy, and almost no corruption.”

In 2003, Sweden’s social democratic former Prime Minister Göran Persson used a bumblebee as an example to illustrate his country’s economy: “With its overly heavy body and little wings, supposedly it should not be able to fly—but it does.”

Dr. Nima Sanandaji, a Swedish researcher and author, wrote the book “Scandinavian Unexceptionalism: Culture, Markets and the Failure of Third-Way Socialism,” which provides a very good explanation of the realities in Nordic countries. Let me summarize the book for you in case you don’t have time to read it.

The welfare state is not the reason for the Nordic countries’ success. The Scandinavian societies had achieved low income-inequality, low levels of poverty, and high levels of economic growth before the development of the welfare state.

Before the implementation of welfare state policies, between 1870 and 1936, Sweden’s growth rate was the highest among industrialized nations. However, as the welfare state was gradually adopted between 1936 and 2008, the growth rate of Sweden fell to 13th.

According to Dr. Sanandaji, “High levels of trust, a strong work ethic, civic participation, social cohesion, individual responsibility and family values are long-standing features of Nordic society that predate the welfare state. These deeper social institutions explain why Sweden, Denmark, and Norway could so quickly grow from impoverished nations to wealthy ones as industrialization and the market economy were introduced in the late 19th century. They also played an important role in Finland’s growing prosperity after World War II.” (All quotations in this article are taken from Sanandaji’s book unless otherwise noted.)

The book indicates that religion, climate, and history all seem to have played a role in forming these special cultures. These countries have homogeneous populations with similar religious and cultural backgrounds. Protestants tend to have a very strong work ethic; a very hostile natural environment make Scandinavia a difficult place to survive unless a farmer works exceptionally hard; many farmers own their own land and have complete control over the fruits of their labor, so it has been financially rewarding to work hard.

Culture matters. It is the culture, free-market capitalism, and the rule of law that has made the Nordic countries prosperous, and made it possible to implement welfare policies without serious adverse consequences. It is also the culture that has fostered the success of the descendants of Scandinavian immigrants to America. Most of those migrants came to America in the 19th century before the implementation of welfare state policies. They were not elite groups, but their descendants are more successful than their cousins in Scandinavia, which suggests that the welfare state policies have impeded the growth of economy.

Southern European countries, such as Italy, France, and Greece, have adopted similar welfare state policies as Nordic countries, but have had much less favorable outcomes. Again, this strongly suggests that culture really matters.

Policies help to shape the character of a society. As Scandinavians became accustomed to high taxes and generous government benefits, their sense of responsibility and their work ethic gradually deteriorated.

Generous welfare benefits reduce the incentives for taking a job or working hard. It also weakens parents’ incentives to teach their children to work hard. More and more people have become dependent on government welfare payments. And the dependency would pass from one generation to the next. This growing population in turn voted to support more welfare and bigger government, and therefore higher taxation, which has pushed the Nordic countries toward more extremes of socialism.

Are Scandinavians More Tolerant of High Taxes? No.

Scandinavians have not been fully aware of the cost for a bigger government. Politicians have created a “fiscal illusion” in which a large portion of taxes is indirect or hidden, like those in effect before wages are paid, in the form of employers’ fees or employers’ social security contributions, and those included in the listed price of goods, like VAT. These taxes eventually fall on all people, but they are not aware of them.

Dr. Sanandaji described a survey conducted in 2003: “The Swedish public was asked to estimate the total amount of taxes they paid. The respondents were reminded to include all forms of direct and indirect taxation. Almost half of the respondents believed that the total taxes amounted to around 30–35% of their income. At the time of the survey, the total tax rate levied on an average income earner, including consumption taxes, was around 60%.”

According to a database of the Organization for Economic Co-operation and Development (OECD) and Dr. Sanandaji’s calculations, from 1965 to 2013, all Nordic nations’ tax burdens have increased significantly, but most of their visible taxes have decreased, except in Denmark.

This has successfully created an illusion that government expansion would not cost much. So why not elect politicians that expand government size and increase welfare?

A Failed Socialist Experiment in Sweden

“Sweden is the world champion in ‘jobless growth’.” —Headline of a 2006 article in the Swedish business daily Dagens Industri

Sweden went the furthest toward socialism among Scandinavian nations since the late 1960s. The basic idea was to replace free markets with a model closer to a socialist planned economy. “Not only did the overall tax burden rise, but the new system also discriminated heavily against individuals who owned businesses. As politics radicalized, the social democratic system began challenging the core of the free-market model: entrepreneurship.”

According to Swedish economist Magnus Henrekson, in 1980, “the effective marginal tax rate (marginal tax plus the effect of inflation) that was levied on Swedish businesses reached more than 100 percent of their profits.” This means that a private entrepreneur would actually lose money if he or she made a profit. Henrekson draws the conclusion that the tax policies were “developed according to the vision of a market economy without individual capitalists and entrepreneurs.”

The result of the policy is obvious: the establishment of new businesses dropped significantly after 1970. In 2004, “38 of the 100 businesses with the highest revenues in Sweden had started as privately owned businesses within the country. Of these firms, just two had been formed after 1970. None of the 100 largest firms ranked by employment were founded within Sweden after 1970. Furthermore, between 1950 and 2000, although the Swedish population grew from 7 million to almost 9 million, net job creation in the private sector was close to zero.”

As for the jobs in the public sector, they increased significantly until the end of the 1970s. At that point, the public sector could not grow larger because taxes had already reached the highest possible level. “When the welfare state could grow no larger, overall job creation came to a halt—neither the private sector nor the public sector expanded.”

At the beginning of the 1980s, “employee funds” were introduced in Sweden. It was to take away a portion of companies’ profits and transfer them to funds controlled by labor unions. The purpose was to achieve socialism moderately by gradually transferring the ownership of private companies to the unions. “Although the system was abolished before it could turn Sweden into a socialist economy, it did manage to drive the founders of IKEA, Tetra Pak, H&M, and other highly successful firms away from the country.”

The dreadful policy of “employee funds” was finally abolished in 1991, which is around the time that Sweden faced its most severe economic crisis since WWII. It took almost two decades for the employment to reach its pre-1990 level. As a comparison, it took only seven years for Sweden to recover, in terms of employment, from the Great Depression in the 1930s.

“Sweden was the more socialist of the Scandinavian countries a few decades ago. It is also the country that has reformed the most.” —Dr. Nima Sanandaji, Swedish Researcher

Beginning in the 1990s, almost all Nordic nations realized that welfare reform is inevitable, except Norway. In 1969, one of the largest offshore oil fields in the world was found in Norwegian waters. The oil wealth makes it possible to sustain its generous welfare systems. Since Sweden and Norway are quite comparable in many ways except for welfare reform, it is a great experiment to see the impact of the reform.

The reform in Sweden includes reducing welfare benefits, lowering taxes, liberalizing the labor market, and implementing gate-keeping mechanisms for receiving sickness and disability benefits. After the reform, from 2006 to 2012, the population supported by government benefits decreased from 20 percent to 14 percent in Sweden. In comparison, the population supported by government benefits in Norway decreased by only less than 1 percent in the same period of time.

For young Norwegians, there is very little incentive to work hard. Employers are therefore turning to foreign labor, including from Sweden. Between 1990 and 2010 the number of young Swedes employed in Norway increased by more than 20 times because of higher wages in Norway brought by oil revenues. According to a survey of Norwegian employers, three out of four answered that Swedish youth work harder than Norwegian youth.

After the reform, during the global financial crisis in 2008 and 2009, Sweden showed impressive economic performance. The reforms lead to greater economic freedom, stronger incentives for work, and less reliance on government welfare.

Denmark and Finland also reformed their welfare systems. Even in Norway, some market reforms have been made. More are likely to come.

A Caution to Americans

The Nordic nations are returning to their free market roots. They have learned their lessons through their forays into welfare states or even tentative socialism, and have turned around from a dead end. We Americans should not fall for leftist propaganda and rush into a future that is doomed to failure.

Jean Chen is originally from China, and writes under a pen name in order to protect her family in China.

Views expressed in this article are the opinions of the author and do not necessarily reflect the views of The Epoch Times. 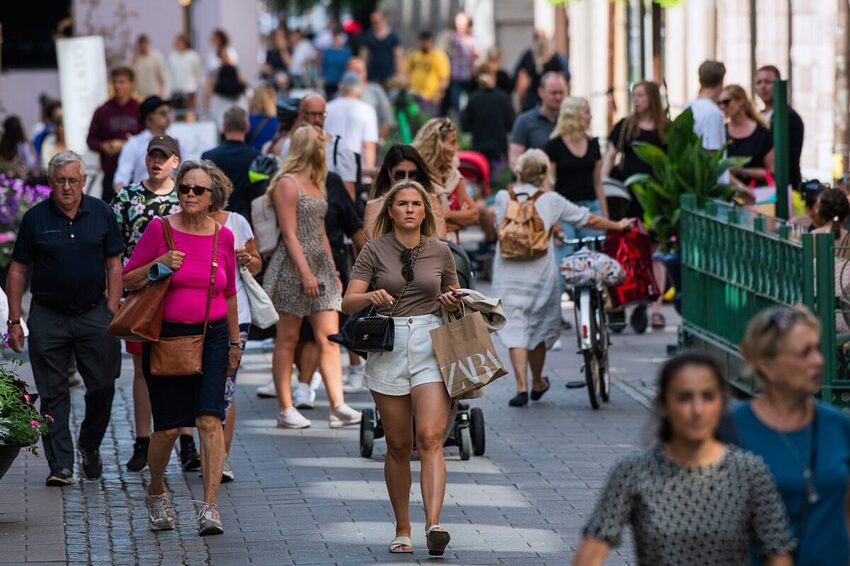 Commentary As the mother of a 17-year-old in a deep-blue state, I am often asked questions about socialism ...

My parents bitch about socialism all the time, right before bitching about Medicare, Social Security cuts. Other bitch about well fare until the pandemic hit and they are all upset they cant get Welfare or Unemployment fast enough. Then I here We must support what ever the Republicans want to do because while it doesn’t should good it is the best for the country, right after complaining that those Damn Commies from china are trying to take over the world.

Wait till everyone realizes that people living on the Moon and Mars are not earthlings anymore!

Everyone should get free healthcare. Apart from that, I question things.