It comes as figures show most regions of England now have more coronavirus patients in hospital than at any point since mid-March.

Sixty percent of people being admitted to hospital with COVID-19 have had two doses of a coronavirus vaccine, according to the government’s chief scientific adviser.

Speaking at a Downing Street news briefing, Sir Patrick Vallance said: "In terms of the number of people in hospital who’ve been double-vaccinated, we know it’s around 60% of the people being admitted to hospital with COVID .

"We do expect there to be over 1,000 people per day being hospitalised with coronavirus because of the increase in infections. 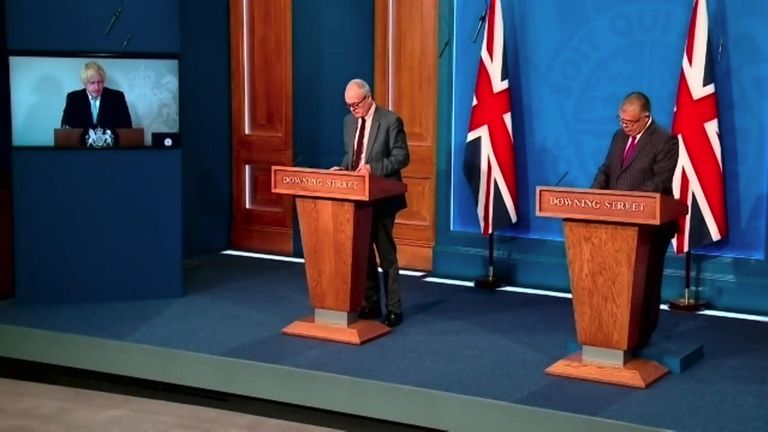 Image:Boris Johnson, who is isolating, leads the COVID news conference

Live COVID updates from the UK and around the world

“But the rates should be lower than they have been previously because of the protective effects of vaccination.”

He said this was not surprising “because the vaccines are not 100% effective”.

“They’re very, very effective, but not 100%, and as a higher proportion of the population is double-vaccinated, it’s inevitable that those 10% of that very large number remain at risk, and therefore will be amongst the people who both catch the infection and end up in hospital.”

Meanwhile, most regions of England now have more coronavirus patients in hospital than at any point since mid-March.

Two regions - south-west England and the combined area of north-east England and Yorkshire - are back to levels last seen more than four months ago.

For England as a whole, there are now 3,813 patients in hospital with COVID-19 - the highest number since 24 March.

Sir Patrick also warned said there were “high levels of COVID and they are increasing”.

He said the UK was quite close to the previous “winter wave” of infections.

“In the winter wave, we were up to around 60,000 people testing positive per day,” he said.

“We are now somewhere on towards 50,000. So we’re quite close to the size of the winter wave of infections and this is going to increase.”

He said the timing of the next peak of the virus would be “uncertain”.

He said: "But most of the models are suggesting that there should be a peak and start seeing some sort of either plateau or decrease over August.

"And at that point, if things continue to increase at the rate they are - and as I said at the outset, there is something like 50,000 or near 50,000 cases per day, or positives per day, at the moment being detected - with a doubling time of 11 days, you can see that that gets to pretty high numbers very quickly.

“And another doubling time will take you to even higher numbers, of course - that would be really quite, quite worrying. So we would like to see some flattening of this, some decrease in the trajectory, and ideally, as you rightly say, you’d like to see this coming down by September, as return of schools would add another pressure on top of that.”

England’s deputy chief medical officer Professor Jonathan Van-Tam added the uncertainty would be “driven by human behaviour over the next four to six weeks”.

He said: "So really, it is kind of in everybody’s hands, yours and mine.

"If we are gradual and cautious, and we don’t tear the pants out of this just because we’re glad to have our full freedoms back, then we will materially affect the size and shape of the remainder of this epidemic curve and where the peak occurs, and how big it is.

“It is literally in the hands of the public, in terms of the behaviours.”

Hospitalisation data not a reason to doubt the vaccine
Analysis by Thomas Moore, science correspondent

The majority of people in hospital with COVID right now have been fully vaccinated.

That will be a surprise to many people, despite the reassurance of the chief scientist Sir Patrick Vallance that it’s to be expected.

Firstly, two doses of the Pfizer jab are 96% effective at preventing hospitalisation. For the AstraZeneca shot the figure is 92%.

Secondly, the older you are the more likely it is that you will end up seriously ill if you get COVID.

So if the virus does break through the protective barrier of the vaccine you are still more likely to end up in hospital if you are over 50.

It’s not a reason to doubt the vaccine.

But it is a reason for everyone to get the jab and reduce levels of the virus spreading through the community. That would mean there’s less risk to double-vaccinated, older people.

The good news is that the death rate is still much lower than in previous waves - about one in 1000 infections leads to death now, compared to around one in 50 in January. That’s partly down to the vaccine, but also better drug treatment for those in hospital.

So even if double-vaccinated people are still ending up in hospital, they stand a much better chance of survival. 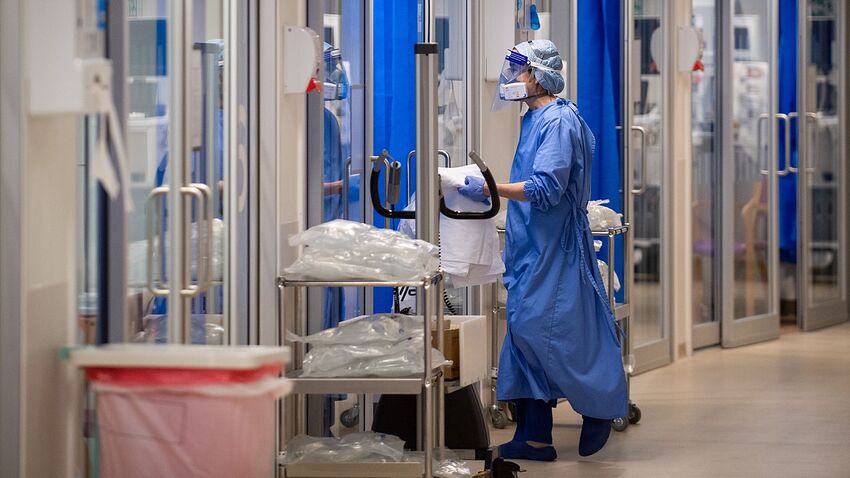 COVID-19: 60% of people being admitted to hospital with coronavirus have been...

It comes as figures show most regions of England now have more coronavirus patients in hospital than at any point since mid-March.